Whenever your opponent starts standing up with their arms posted on your biceps/underneath your armpits, you have a chance for a Kneebar Sweep.

A kneebar (also known as legbar, kneelock or hiza-juji-gatame) is a leglock that can hyperextend the knee. The basic kneebar technique is similar to that of an armbar. The practitioner will trap the opponent’s leg in between their legs and secure the leg with their arms so the opponent’s kneecappoints towards the body.

The practitioner then applies pressure with their hips, forcing the opponent’s leg to straighten, hyperextending the knee joint. A variation of the kneebar is similarly accomplished, but instead of holding the leg with the hands, the practitioner will trap the opponent’s foot behind one armpit.

The Kneebar is one of those submissions that you feel fantastic about once you tap someone out with it.

Wonder how it’s done? It’s not complicated at all!
Roberto Jimenez demonstrates on the video below:

Learn the secrets of a dangerous closed guard from the young black belt that tore through the scene at purple and brown belt, Roberto Jimenez. 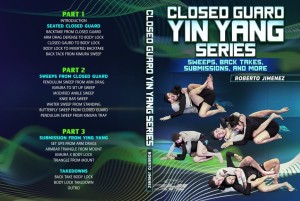