The Flying Armbar: An “Easy” Way To Do It

You’ve probably seen the video in which a grappler, trying to do the Flying Armbar, falls down and seriously injures his neck… A horrific incident, one which everyone is extremely sad about and which is bound to leave everyone that watches it – even the most cold-blooded of jiujiteiros out there – with sweaty palms.

Therefore, it’s only natural to ask: are the flying submissions even worth trying? Are they ever worth it?

As a general rule, you should stay away from flying submissions in BJJ… But if you really want to do them, you need to find the safest route to get there.

For example, the Flying Armbar can be done if your opponent is seated.
Estevan Martinez demonstrates how to do it on the video below:

Join “The Giant Slayer” As Estevan Martinez Shows You The Best Ways To Escape Common Bad Positions In Grappling And Get Back On Offense ASAP. 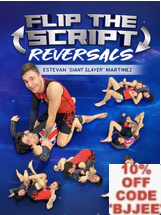 The post The Flying Armbar: An “Easy” Way To Do It appeared first on Bjj Eastern Europe.