Using Wrestling for A Better Half Guard

Wrestling can be one of the best things you can cross train with your Brazilian Jiu Jitsu training regimen. Wrestling can be the game changing factor you are missing that segregates you from your competition. Why is it so important to wrestle? You can develop tenacity, technique, strength, cardio, and so much more. Wrestling has its place in several aspects of Jiu Jitsu but today we are going to discuss the benefit of wrestling for the half guard.

Why is wrestling so good for the half guard? It is because so many of the best sweeps from the half involve using your under hook to get up and single leg, double leg, or ankle picks your opponent. If you’re not familiar with the single leg or double leg, check out our articles “Single Leg Takedown” and “Double Leg Takedown.”

The Single Leg from half Guard

Once you get a single leg, you have to know how to finish it because your opponent can react in numerous ways. You never know what they’re going to do so it is better to have a variety of ways to finish the takedown. Check out this sweep from Bernardo Faria where he goes to a single leg from the half.

Double Leg from Half Guard

If you want to take your half guard to the next level check out World Champion, Lucas Leite’s DVD Set “The Coyote Half Guard.” Lucas has long been infamous for his aggressive half guard and incredible wrestling! 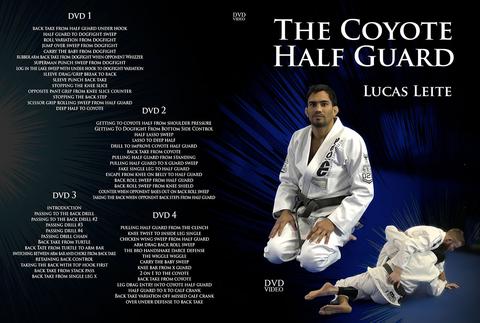