One of the standouts at this past Saturday’s Bitetti Combat 5 event, in Barueri, São Paulo was Murilo Ninja. Despite the hard time he encountered early in the fight against Holland’s Jason Jones, when he landed on bottom and stuck in a guillotine, Ninja proved his Jiu-Jitsu is up to date and had the upper hand on the ground. After sinking an arm and neck choke, he moved to mount, took the back and rained down strikes until the referee intervened.

“I knew he was an excellent striker and has a solid judo background. My strategy was really to take him down, because I imagined I was better on the ground than him. He came on strong at the start, but, thank God, I managed to end the fight well,” Ninja told GRACIEMAG.com shortly after winning. 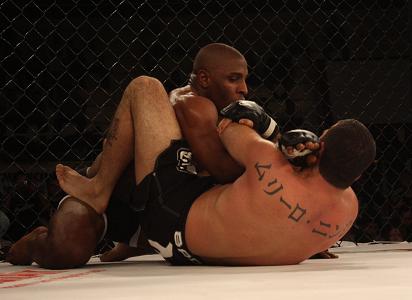 Now the Curitiba native is focused on his next two challenges, in early 2010, when he will fight in both Japan and the United States.
“I’m going to rest until January 7. Then I’ll get to work for Dream and Shine. I’m going to start the year training hard alongside my brother,” he guarantees.

This season, Ninja saw action at Bitetti Combat twice. The fighter is grateful to the organization for the opportunities.
“I found the event to be excellent, with great fights. We need more events like this one down the road,” he says in finishing.