In Brazil and USA, father and son bond through Jiu-Jitsu 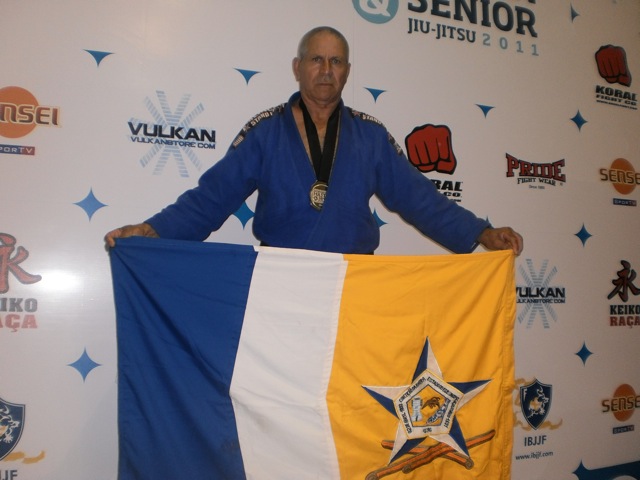 Imagine you’re a Jiu-Jitsu black belt who goes on to have a career in MMA, wins a fight by tapout, and calls your dad in Brazil. His response: “Well done, son. Me too.” You’ll start to get an idea of what the Novaes family’s life in Jiu-Jitsu is like.

A native of the Brazilian state of Espirito Santo, Jônatas Novaes got a taste of a similar feeling late last month. He’s living in the USA and has been winning MMA fights around those parts, and he’s already dreaming of a berth in the UFC.

Well while Jônatas was submitting his latest opponent with an excrutiating armbar, his father, Zartônio Aguirre (Brasa), a 65-year-old black belt, was winning two silver medals at the 2011 International Masters and Seniors Jiu-Jitsu tournament.

“The interesting part is that he took the opposite route of what most dads take: instead of introducing his kids to Jiu-Jitsu, Jônatas introduced him to Jiu-Jitsu, taking him with him to train at the academy. In this case, the sons don’t model themselves on their fathers, he modeled himself on us, and now he’s a champion and example to his late-aged friends,” remarked Zartônio Junior.

“My pops is retired now, and thank God he’s been doing well ever since he started Jiu-Jitsu. He started at 55, after I won a competition as a purple belt,” Jônatas added. “And I was introduced to Jiu-Jitsu by my brother, Zartônio Junior. Last year, my dad won his weight group and the absolute as a brown belt and got his black belt on the podium at the International Masters. It was touching. Now this year he didn’t train at all (laughs), went in there with determination and courage alone, but next year he’ll get the gold. He’s really strong, worked as a mechanic his whole life, and now all he wants to do is go fishing, play soccer and train Jiu-Jitsu!”