How to win Jiu-Jitsu medals (lots of them) 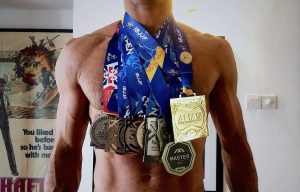 We all know that nothing in life is guaranteed, but there remains one simple fact; there is a world, and we live in that world and that world runs on formulaic probability (formulas + probability).

‘Formulaic probability’ is the simple notion I use to describe how everything in this world is controlled by some kind of mathematical formula, with the ‘formula’ being a combination of inputs that result in a single ‘output’ or ‘result’. That ‘output’ can be something predetermined by you, meaning that used correctly what you will have is a formula for success, or gold medals. Let me explain.

Jiu-Jitsu is an excellent example of this on multiple levels. We have all heard the likes of Mr Danaher, Firas Zahabi and other coaching greats describe Jiu-Jitsu’s true beauty as the ability to ‘solve problems in real time’. Much like a computer program uses algorithms to cycle through possible data combinations (inputs) to find a specific outcome (output). In Jiu-Jitsu we do the very same thing. For example, you want to force your opponent to the ground. If it was a computer program it might look something like this:

So as you can see above, although there are infinite input/output combinations, ultimately you can identify your target output and find the right combination for the right scenario (an opponent in this case). You can then work to maximize your chances of Jiu-Jitsu success beyond the average age group Jiu-Jitsu competitor by testing input/output combinations, finding the ones that deliver the highest success and incorporating them into your game. 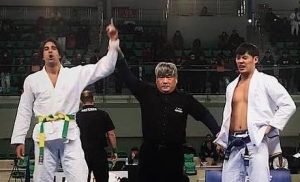 Now, why am I talking about this mathematical, algorithmic mumbo jumbo and how does that relate to what we were supposed to be talking about which was; ‘How does one win a boat load of Jiu-Jitsu medals?!’

In order for me to fully explain the method, we need to first understand that ‘input = output’ or ‘you reap what you sow’ therefore, the ability to train full time is a crucial part of taking to your Jiu-Jitsu game to a level where you could indeed confidently step on to an IBJFF Championship Mat to compete in Worlds, Euros, Pans, Brazilian Nationals and crush your way through the qualifiers, quarter finals, semi-finals and finals until you are stood atop the section of the podium that says ‘Number 1’ and are blessed with that lovely piece of IBJJF blue ribbon adorned shiny gold neck hardware.

Now, I know what you’re thinking. How can I train Jiu-Jitsu full time with no money and a full time job? This is something I will touch in more detail in a later article, so don’t worry… all will be revealed.

One of the most interesting examples of an athlete solving the above problem is a Jiu-Jitsu athlete called Aaron Siwoku, who I would constantly encounter at IBJJF competitions around the world in places such as Tokyo, Japan winning Gold at the IBJJF Asian Championships, to Lisbon Portugal at the IBJJF European Championships winning gold there also, It seems he was constantly winning gold medal after gold medal in his division each time I would see him in various cities across the world always on the podium. I wondered how it was possible that a) he could afford to travel around the world to literally every competition and b) how his competition results were so consistent. So one day I decided to ask him, and it came down to 2 things:

1) He was able to pretty much train full time as he had basically become his own sponsored athlete by creating an online plant based protein and nutrition brand called ‘Honest Earth’ (which is awesome by the way!). He told me he is able to run this business from his laptop anywhere in the world and completely control his own schedule as well as have an income.

2) He also understood the very topic I am writing about in this article which is ‘limit the input possibilities’ to maximize the ‘output = success’.  The combination of these 2 things is very powerful because Aaron now had the ability to train full time and subsequently spend a lot of time figuring out what the ‘high probability inputs’ were in a Jiu-Jitsu match that would maximize his chance of success in competition.

Our conversation then took a fascinating turn, we started discussing whether or not some people were more gifted than others or was this just a fairytale, we decided on the spot that sure it might be true that until we are 10 years old natural ability can shine, but past that point it seems that only one thing takes precedence and that’s hard work. Not just any kind of hard work, but structured, well thought through good old fashioned hard work. 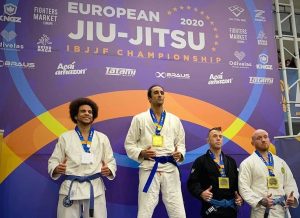 In the IBJJF European Championships I watched Aaron beat 5 opponents to IBJJF Gold without having a single point scored against him. After watching this It became clear to me that this was somebody who understood the concept I’m so passionate about which is If you can spend time identifying your target output e.g ‘take my opponent down’ then from there you can figure out how to reduce the ‘input’ combinations from infinite to not so infinite.

For example, in Jiu-Jitsu there is an unlimited number of ‘actions’ your opponent could opt to make, but if you ‘go first’ and pressure your opponent with your own actions (attacking) then you immediately limit your opponent to ‘reactions’ to defense only. When you do this, you are immediately limiting the number of ‘possibilities’ your opponent has thus shifting him into a disadvantage because before he can start to attack you again he must prevent your attack. By limiting your opponent’s offensive ‘output’ you also reduce the number of offense ‘input possibilities’ that you must cycle through to find a winning combination that delivers your ‘target output’ which in this case is ‘take my opponent down’. 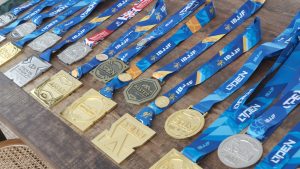 The post How to win jiu-jitsu medals — lots of them first appeared on Graciemag.