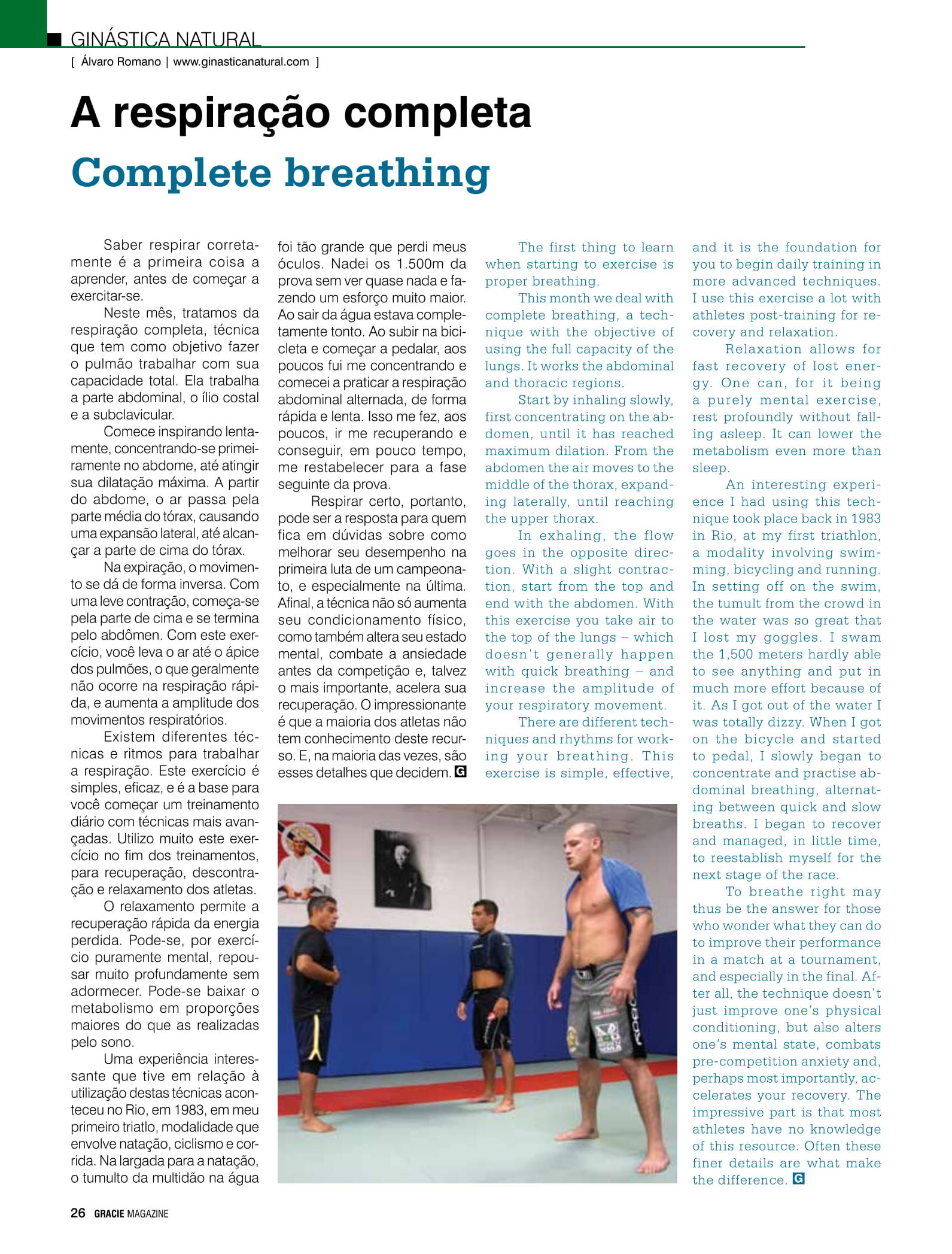 The first thing to learn
when starting to exercise is
proper breathing.
This month we deal with
complete breathing, a technique with the objective of
using the full capacity of the
lungs. It works the abdominal
and thoracic regions.
Start by inhaling slowly,
first concentrating on the abdomen, until it has reached
maximum dilation. From the
abdomen the air moves to the
middle of the thorax, expanding laterally, until reaching
the upper thorax.
In exhaling, the flow
goes in the opposite direction. With a slight contraction, start from the top and
end with the abdomen. With
this exercise you take air to
the top of the lungs – which
doesn’t generally happen
with quick breathing – and
increase the amplitude of
your respiratory movement.
There are different techniques and rhythms for working your breathing. This
exercise is simple, effective,
and it is the foundation for
you to begin daily training in
more advanced techniques.
I use this exercise a lot with
athletes post-training for recovery and relaxation.
Relaxation allows for
fast recovery of lost energy. One can, for it being
a purely mental exercise,
rest profoundly without falling asleep. It can lower the
metabolism even more than
sleep.
An interesting experience I had using this technique took place back in 1983
in Rio, at my first triathlon,
a modality involving swimming, bicycling and running.
In setting off on the swim,
the tumult from the crowd in
the water was so great that
I lost my goggles. I swam
the 1,500 meters hardly able
to see anything and put in
much more effort because of
it. As I got out of the water I
was totally dizzy. When I got
on the bicycle and started
to pedal, I slowly began to
concentrate and practise abdominal breathing, alternating between quick and slow
breaths. I began to recover
and managed, in little time,
to reestablish myself for the
next stage of the race.
To breathe right may
thus be the answer for those
who wonder what they can do
to improve their performance
in a match at a tournament,
and especially in the final. After all, the technique doesn’t
just improve one’s physical
conditioning, but also alters
one’s mental state, combats
pre-competition anxiety and,
perhaps most importantly, accelerates your recovery. The
impressive part is that most
athletes have no knowledge
of this resource. Often these
finer details are what make
the difference.