Why Do So Many People Quit Jiu-Jitsu?

Jiu Jitsu is one of the toughest martial arts in the entire world; actually, it is one of the toughest things you can learn to do. This difficulty condones an extremely high dropout rate; many people have said that Brazilian Jiu Jitsu has the highest dropout rate of any martial art. So what is the cause of this? This question is not so simple because there are several factors that can play a role in what contributes to people quitting Jiu Jitsu. We are not referring to people who have to quit due to reasons related to their lives such as work, school, family, and other common issues. We are just talking about those guys who start training, become obsessive and suddenly fall of the face of the earth. The guys that quit at blue belt, or towards the end of white belt and all of the sudden we see them doing other things on their social media’s. Why do they quit?

Well, first off, simply put, Jiu Jitsu is for life. Not many people have the dedication to maintain a passion for their eternity. So for some, after a certain level of mastery, they may be satisfied with the results. Jiu Jitsu also has one of the hardest learning curves out of any activity in the entire world, because of this many people will quit. Nobody walks into a bjj academy and rolls well if they have no experience. There is no preconceived notion on how to grapple whereas with striking; every human has a preconceived notion of how to throw a punch. Although some people may have athletic or natural instincts when they grapple for the first time, none of them have good technique. Somebody may naturally head lock you or be difficult to sweep, but nobody is going to waltz into a bjj academy and be able to put someone into X-Guard and sweep them, this is an acquired knowledge.

Since bjj is so difficult to learn and there is no preconceived notion of how to do it, many people will ultimately quit. Other reasons for people quitting may be the fact that everything in life has come easy to some and they don’t have the proper personality to devote so much time to something in order to get good, these people may only look at the macro perspective of life and lack the micro perspective. Jiu Jitsu is all about micro progression, setting small goals and attaining them week by week. Other people may just not be able to handle tapping out, and many other reasons can contribute to the dropout rate, such as the discomfort associated with training.

The learning curve may be the number one characteristic that contributes to such a high dropout rate. It is difficult for people to see the effectiveness of bjj and it is even more difficult to bring yourself to a gym and start training. The difficulties only continue, we all remember are first days, we walk into the academy, we are in a place with people we don’t know and there is a certain level of discomfort, all of the sudden we start rolling with people smaller than us, people we assume we could handle, then, all of the sudden, you’re fighting for your life and tapping out every 30 seconds. Why come back? You were just humiliated, or at least you think. This is what contributes to so many people coming in, trying it out, and never coming back.

What about the guy that sticks with it for a year? Well they may come in and decide that this is something that they want to progress in, after training for a year, they have learned certain things but those darn purple belts can still man handle them. This person may have the sudden realization that the learning curve of this sport is grueling and decide that it is not for them. Jiu Jitsu is one of the hardest things that anybody can do so easily put, it is not difficult to understand why so many people will quit. They say there is a certain personality that will embrace the chaos, discomfort, and lifestyle associated with bjj. Check out this video below that is extremely motivational on why you should train bjj.

Jiu Jitsu techniques are so difficult to understand and they are so unnatural for the body. It truly is like learning how to swim and when you join an academy it is such an immersive experience it can be overwhelming, some people may not enjoy all of this and quit. Check out this cool video below where Black Belt Stephan Kesting shows three ways to teach the same move with little detail, moderate detail, and a lot of details and it really exemplifies how technical bjj can be.

So what contributes to the blue belt blues? Well, there are several factors. One of the main things is the fact that some people plateau, they have a hard time progressing after a certain point and they don’t progress as fast. There is saying in bjj that you will progress fastest at white belt, this is true. This is because as a white belt you know nothing so there is much to learn, once you are a good blue belt and you have some solid training and a game developed, it can become increasingly difficult to progress.

What happens is you start to look at things on a macro level and forget about the micro progressions. It is essential to understand that bjj is ultimately about micro progressions. What we mean by this is that in Jiu Jitsu you want to set small attainable goals every week and work on them. Goals like this might include something like use the butterfly sweep, try and triangle everyone at the academy, etc. You need to have small goals that show you that you are progressing with the philosophy behind your bjj that is all about the journey and not about the destination. You have to understand that you are here for the journey.

If you or someone you know needs a helping hand to reach the next belt level or learn some new tricks that bring the fun back to bjj, check out Chris Haueter’s DVD set “Old School Efficient BJJ.” For those of you that don’t know, Chris Haueter is an absolute savage black belt. He has been a black belt since 1996, to put this into perspective, that is longer than mnay of today’s black belt world champions have even been training. For instance 5x Black Belt World Champion, Bernardo Faria did not start training bjj until 2001, Chris had already been a black belt for 5 years. 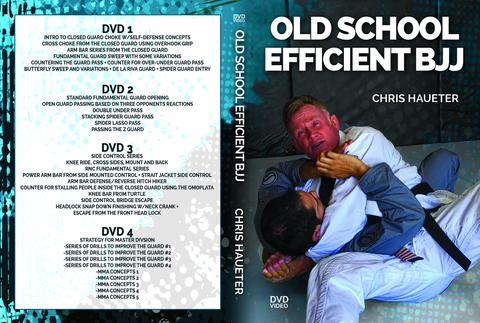