How To Develop Your Signature BJJ

There are literally thousands upon thousands of jiu jitsu moves and positions. And it can be argued that each of these moves might have thousands of nuances and variations. As we continue to train and develop, we are exposed to more and more techniques over time. Each of us tends to gravitate to certain types of moves early on, whether it be the favoring of closed guard, half guard, or some particular style of passing early on, we all see an evolution in our game.

How do we develop our own signature style or approach to BJJ? How can we bring our own creativity onto the mats? When will I know when my BJJ game has arrived?

We are told constantly that if we just show up and don’t quit that we will eventually become more confident in our jiu jitsu. For most of us that probably means that the jiu jitsu ‘game’ that we have today at white or blue belt will be profoundly different than the game we will have as black belts. It just makes sense, I’ll know more and have more tricks to use against my opponents.

What if someone told you that the game you play today, will most likely be the game that you play at black belt? Would that be a good thing or a bad thing to you? The longer you train, the more you realize that your signature game develops from those initial techniques you gravitated towards.

Sometimes in the quest to learn more and more techniques and develop a seemingly more complex game, we abandon those early techniques, but for world class competitors like Tom DeBlass and Bernardo Faria who have shared in countless interviews that the game they play today is nearly the same game they played as new students and blue belts. The old cliche “the song remains the same” takes on new meaning from this perspective that deepening our knowledge of these early techniques might be the best way to develop.

For both of these competitors, half guard has been a staple of their games. For DeBlass, as a blue belt his favorite game was to use half guard to set up leg attacks. It turns out that nearly 15 years later, Tom DeBlass has effectively used half guard and leg attacks as a basis of his much broader game. Over the years, he has expanded the depth of knowledge about the two areas and continues to add new nuances to these staples of his system.

For Bernardo Faria, the half guard has also been something that he’s been working on and perfecting since a blue belt. As a five time world champion in the gi Bernardo and his particular style of half and deep half guard has become synonymous with his name. He even went as far as to develop a version of half guard that he describes as somewhere between half guard and deep half guard. This Faria guard lends itself to a number of great sweeps.

So what should you take from this article?

First, don’t be in such a rush to add new techniques to your arsenal. Spend more time and enjoy each technique trying to implement it to the best of your ability. Every technique is not meant to work for everyone, depending on body style, athleticism or perhaps other factors. Also, once you feel that you’ve mastered a position or technique and want to move on to something else, feel free to move on, but know that you’ve not really mastered anything and until you can start bringing your own color and flavor to the technique, you’ve not truly left your mark or mastered anything. That would take more mat time than any of us will ever have.

If you’re interested in learning more of the secrets from the two world class half guard players, Tom DeBlass and Bernardo Faria you can get Tom’s best-selling “Half Domination” series here and get Bernardo’s “Battle Tested Half Guard” instructional here. You will soon find out why he is known as the greatest half guard player in competition history. 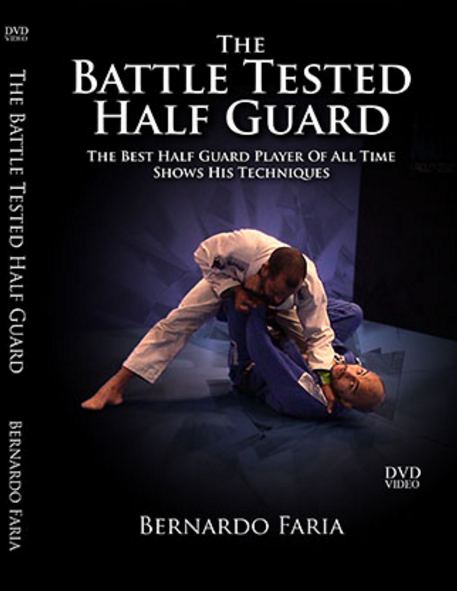