Why We Bow In Martial Arts

I took my first martial arts lesson over thirty years ago. I don’t remember any of the techniques I learned. I’m sure it was some variation of a front kick and some punch and block combination from a horse stance or something “karate-kidesque”. The one thing I do remember was that when we walked onto the training floor we paused and bowed before we entered. My teacher explained that when we bowed we were “clearing the calculator”… that, “this was an opportunity to remind ourselves to be clear and present for our lesson.” I thought that was pretty cool and I never forgot my first martial arts lesson!

Since then I always bow when I walk into any martial arts school, regardless of style, etc. Bowing has become so instinctual that I catch myself bowing from time to time when walk into a store!   In most schools bowing is very much a part of the martial arts culture and tradition. Whether it’s bowing when you enter the school, to classmates, to instructors, most school have this as a normal practice. In Brazilian Jiu-Jitsu schools there seems to be a divide on whether you should bow or not? I’ve been to some schools that are super laid back and nobody bows, and I have seen schools where everybody bows and schools like the one I train at where it’s left up to you whether you want to bow or not. 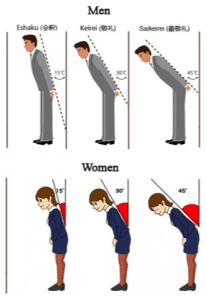 The act of bowing, or bending the torso as a social gesture is seen in just about every culture throughout the world. In European cultures you see references of men “bowing and scraping”, or pulling the right foot across the ground as one bows. This was often done as a sign of respect or gratitude. The bow and phrase “Namaste”, which literally means, “I bow to you” is commonplace in most yoga classes.   In Japan the birthplace of Jiu-Jitsu the bow takes on an all-new meaning. When I visited Japan in 1997 (my then BJJ teacher Allan Goes was fighting Sakaraba in Pride-4) I remember being in awe of seeing the hotel front desk person bow when I entered the hotel. The act of bowing in Japan is like a handshake on steroids! In Japan the bow can take on many meanings based upon the situation, depth of the bow, length of time held, etc.   For example, in both formal and informal situations it is expected that you bow at least 30 degrees.

The Japanese believe that the head is the most important part of the body, and by bowing, they are showing their respect and gratitude. Believe it or not, bowing is even seen in the animal kingdom. Wolves and dogs exhibit a behavior called the “play bow”. Essentially it’s the same thing your dog does when you come home from work.

According to the Wolf Information & Awareness Center, “The play bow is a deep forward bow, kind of like 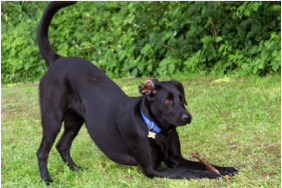 stretching but there is no yawn, just an occasional woof-like vocalization with paws stretched forward, rump raised high, and tail straight out or wagging.”

Even captive red wolves have been known to respond to the human play bow with their own bow. The bow essentially says, “don’t take what I do next too serious!” It’s a way for your dog to say, “hey let’s play and wrestle and I may bite a little but it’s all in the name of fun!”

As I stated earlier you don’t see the bow in all BJJ schools and often not even between practitioners. But the one universal practice you see across the board in every school is the ‘slap and bump’. You know, you’re getting ready to roll with your BJJ buddy and before the action begins you slap hands and bump fists. You see it in every open mat, in regional tournaments and even high-level events…everybody does the slap and bump! The ‘slap and bump’ has in some circles replaced the bow before a match. Handshaking, like bowing is seen across all cultures. According to our friends at Wikipedia, “a depiction of two soldiers shaking hands can be found on part of a 5th-century BC funerary stele on display in the Pergamon Museum.” Notice how they grasp hands with the right hand (dominant hand) and grasp their weapons in the non-dominant left hand…. perhaps as a show of peace?

You see handshaking in just about every physical contest as a show of good sportsmanship. But handshakes are more than just a high five after a sporting event. Stay with me, as this is where things get a little weird. According to scientific research at the Weizmann Institute, “human handshakes serve as a means of transferring social chemical signals between the shakers.” Now here’s where things take a quick left turn, “there is a tendency to bring the shaken hands to the vicinity of the nose and perform an olfactory sampling of it.” In other words, in this study most people smelled their own hands after they shook someone else’s hand.   It has something to do with a behavior scientists call “chemo-signaling”. So apparently handshaking in humans is a lot like dogs sniffing each other when they greet one another. So maybe we are a little closer to our best friend the dog than we thought?

Whether you choose to ‘play-bow’ or ‘slap and bump’, in the end you get to decide what works for you. For me when I practice the Gentle Art? I like to bow when I enter the mats as a reminder to “clear my calculator” and be ‘clear and present’ for my lesson. For my partners and students a simple ‘slap and bump’ will do, but please no “olfactory sampling!”

The post Why We Bow In Martial Arts appeared first on Jiu-Jitsu Times.