Undefeated in fourteen fights, Charles “do Bronx” Oliveira doesn’t get any rest in the UFC. With two finishes in his first two fights for the promotion, the last against TUF champion Efrain Escudero, Charles will now face Jim Miller next Saturday in Canada, at UFC 124.

“I’m really happy with the performances I’ve been having and I want to close out the year with another win. I’m training here in Canada with (Maurício, André Dida’s brother ) Veio, who is helping us a lot. The city is marvelous, we’re in a great hotel. I’m 100% for this fight, focused, happy and when I’m like this it’s hard to beat me. Ericson and Veio are passing me a lot of positive energy and I’m ready for war. I want this win,” he tells GRACIEMAG.com. 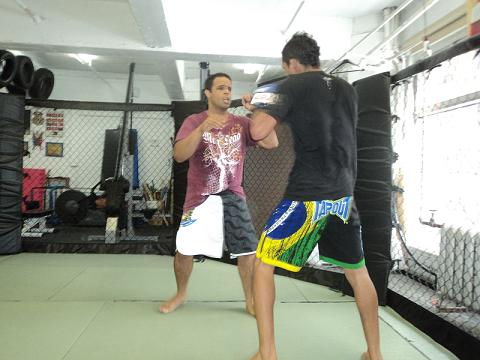 Miller is coming off a five-fight win streak in the UFC and, of the eighteen wins on his record (two losses), he has finished in ten. Charles’s coach at Bronx’s Gold Team, Ericson Cardoso, speaks of his pupil’s opponent.

“Jim Miller has shown he’s a dangerous fighter, a south-paw. We always pick up on the weak points and I feel Charles can make use of his reach, seeing as he is taller. I also feel Charles is better on the ground. Miller said in an interview that he’s a Jiu-Jitsu black belt, that he should be respected. We never respect anyone. We know he’s good on the ground, but I know even more about my student. We’re ready to fight standing or on the ground,” he says in analysis.

“Miller is a well-rounded guy, tough standing and good on the ground. I feel he’s more technical than Escudero, for example, and he comes on strong. He’ll try to impose the pace, which no one has managed to do with Charles in the UFC yet. That’s what we expect from him and we trained based on that,” he says in closing.