“Português” takes out top competition and brings joy to master

Usually the main standout at a competition is the winner of the absolute division, but Eduardo Santoro, or “Português” as he’s known around Cia Paulista academy, divided the attention at this past weekend’s World Cup in São Paulo. After winning the master absolute, the black belt dove into the adult division, winning the medium heavyweight class after beating the likes of Guto Campos and Sérgio Moraes by submission. Before winning the competition, however, Santoro had an even greater challenge.

“I suffered a groin injury following the Worlds and, when I was just about recovered, my meniscus popped out of place and I had to operate. I only returned to training on November 8, so I had four weeks to get ready for the competition,” he says.

“But, no matter how bad things were, I’m persistent and don’t give up. That was important while I was on ice,” adds Português, who goes on to comment on his campaign at the event:

“First I entered the master absolute, where I had three matches and closed out the final. I beat Eduardo Telles in the semifinal and, as the adult division was about to commence, I talked it over with André Bastos and we split the prize. Following my last match in the master division, I even had mixed thoughts about going into the adult. I didn’t rest at all and went in to face Yan Cabral. My bracket was sinister and I didn’t know if I could take it.”

After that, Santoro beat Alex Monsalve (Alliance), before facing the burliest fighters signed up in the division.

“I faced Guto Campos in the semifinal. We were tied up until the end, when I managed to finish with a triangle. I got to rest a bit before going into the final against Sergio (Moraes), and I knew he was a very strategic opponent, hard to score on. But I managed to replace guard, I sunk an omoplata and, when I closed guard, I did a position I’ve been doing for a long time and managed to finish with the armbar. I couldn’t believe it at the time!” he said jubilantly. Now recovered from his injuries, the black belt expects to give a lot of people a hard time in 2011.

“Next year I want to be in all the major competitions, since I spent so much time on ice in 2010. I want to enter the Pan, Worlds, the Fepa events here in São Paulo, and go to Abu Dhabi. 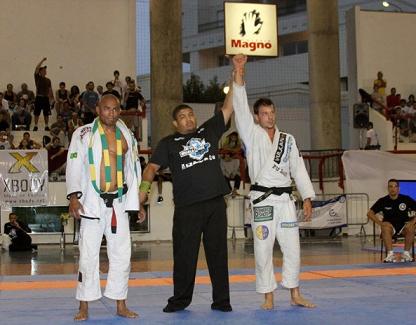 But the joy was not all his. His master, Max Trombini, was quite pleased and he too played an important part in the win.

“Portuga asked me: ‘Sensei, should I or shouldn’t I compete in the adult?’ I told him: ‘Warrior, you signed up in the division and didn’t do the master final. So fight with joy, have fun, because this is your world. I want to see that old Portuga again!’ And he had a great championship,” he says.

“Training at Cia. Paulista is tough and he’s been used to it since he was a white belt, was always very disciplined. I’m a teacher who’s a disciplinarian and severe, to some grumpy, but I demand discipline so they don’t get soft. I’d rather pull my army than push it,” says Max in closing, prideful of his student.