Yesterday, December 25, Rolles Gracie’s opponent for the February-6 UFC 109 show, in Las Vegas, was confirmed. The first member of the Gracie family to feature in the Ultimate Fighting Championship since Royce, Rolles, will have Mostapha Al Turk across the octagon from him in his debut for the event, just as GRACIEMAG.com announced some weeks ago. According to the UFC website, the fight will feature on the live television broadcast.

Mostapha has lost his last two outings in the UFC, whereas Rolles has used his Jiu-Jitsu effectively to remain undefeated in his prior MMA bouts, achieving the submission before the bell ending the first round sounded in all three outings. The most recent came at Art of War, in China, when he used an arm-and-neck choke to finish off Peter Grahan. Check out the GRACIEMAG.com Photo Gallery featuring a recent training session of the Gracie’s. 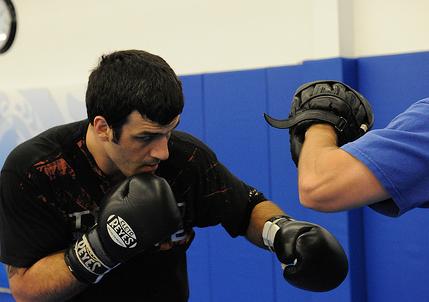 Rolles works on his striking with Mark Henry

Also on the main card, Nate Marquardt faces Chael Sonnen and Matt Serra dukes it out with Frank Trigg. Another Gentle Art black belt, Ronys Torres makes is long-awaited debut in the event, against Melvin Guillard.

Check out the updated card: