The honor of fighting alongside the master 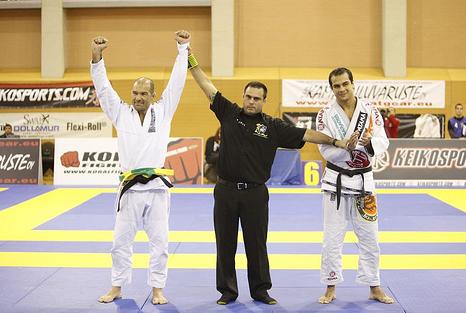 Bernardo Augusto Faria gradually little by little starts coming up with the good results he was accustomed to getting at other belts, at black belt. However, in addition to celebrating victory, the Alliance representative had a special thrill at the European Jiu-Jitsu Championship, which took place late January, in Portugal.

Bernardo competed in the same category as his master, Fábio Gurgel, who at 40 years old had a victorious venture into the adult division.

“I am very happy to have closed out the heavyweight division of the European Championship with my professor Fábio Gurgel. It was an honor to have reached the final with him and, thank God, I had great matches in the tournament. The year started off really well for me,” he said in celebration.

Building on the laurels of his triumph, Bernardo remains in the Old Continent, where he is holding a series of seminars.

“After the championship I came to the north of Finland to do two seminars at two branches of our team. I’ll head back to Brazil on March 4 to get back to training at Alliance headquarters in Sao Paulo, targetting the Pan American, World Pro, Brazilian Nationals and IBJJF World Championship,” he says.