Ever-present at the edge of the matted area at Jiu-Jitsu championships, Professor Alex Crispim (3W, 2L) sent in news:

“I just got word at the last minute that I’m going to fight in Strikeforce again, at the December-19 event in San Jose, California. I couldn’t turn it down!” wrote our GMA and Gracie Barra black belt, who fought for the organization for the first time in 2007. 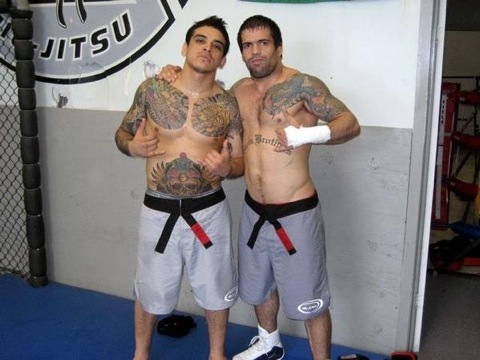 Crispin (on the right) with teammate Sapo

He will face AJ Fonseca (4W, 1L), a fighter on Urijah Faber’s team and undefeated in over four years. The event on the 19th, marking Cung Le’s return and Ronaldo Jacaré’s debut, will be broadcast on cable channel Showtime in the USA.

“I was already trying to make it back to that organization, and now I’ll be back in a new division, 145 pounds – and I used to fight in the 155-pound division. I’ll be representing the good old BarraBrothers and the gang from UFC Gm, where I’m heading the Jiu-Jitsu program while they give me serious backing in physical conditioning and muay thai. I would also like to thank my wife and trainers Allan Maravilha and physical conditioning coach Rob for their support, as well as my students at the new gym who always believed in me,” he says in closing.