At the Las Vegas International Open this Saturday 22-year-old Gracie Fighter rep Samir Chantre proved he has arrived as a black belt, winning both his featherweight division and the absolute. The win is all the sweeter to the black belt of two and a half years because it’s the first time he’s ever won the open class and the first time he’s attended this event. Samir and his teammate Caio Terra, who won his division and the absolute last year, closed out the bracket together, and Samir was awarded the gold medal. 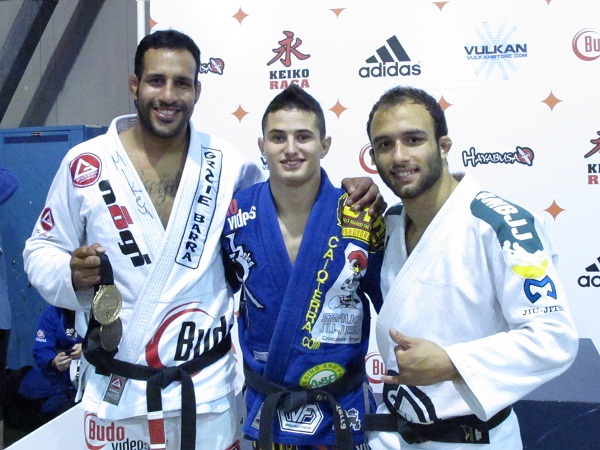 Samir usually competes in the open to “see what it feels like.” After getting a taste of victory, his perspective on the absolute has changed. “I want to do it more to win now, rather than to just see how it feels,” he says, “I will definitely continue to fight the open in the future.”

Samir wasn’t even going to compete in the absolute today because he’d already competed in his weight class and he was refereeing at the event, but Caio asked him if he would, so he agreed. “Caio said he couldn’t handle three or four matches because he’s injured and hasn’t been training, and he didn’t want to get hurt worse today,” he says, “He asked me to make it to the final so we could close out the bracket. I did my best and I put everything I had out there to do this, and we made it.”

In the absolute Samir had two matches and went through to the final. In his first he swept his opponent and landed in full mount for six points. Then his opponent felt his ankle pop and pulled out of the contest.

Samir was pit against Kron Gracie student Rodrigo Teixeira for his second match, and he knew he was in for a battle. “I’ve seen him compete before,” Samir says, “He’s a very good and very tough competitor. He’s very strong.” Samir was able to sweep Rodrigo twice to beat him 4-0.

Then he and Caio met up in the final to close out the bracket, just as they had planned. “It’s my first open class win and it feels great,” Samir says, “Especially closing out with my teammate. It makes it even better.”

In the featherweight division Samir closed out the bracket with another Gracie Fighter teammate of his, Osvaldo Moizinho, with Samir taking his first gold of the day. They did take to the mats to roll during their final but it was more of a “flow drill”, with each of them racking up 16 points apiece on each other.

In all he had two matches in his division, winning the first via foot lock in the first four minutes of the first match, before meeting up with Osvaldo in the final. “I hope Osvaldo and I do the same thing at the Nationals,” Samir says, “I’m defending my title and I want to close out with him again there.”

Samir says his experience at the Las Vegas International Open was truly great. “I’ve had a pretty successful 2011,” he says, “I had a serious knee injury that took me out of the Pan, but I competed at the Worlds and I came in third. I had really good matches, though. I’m still a kid and have only been a black belt for two years. I’m happy about my performances.”

For more information about this up-and-coming young black belt, catch him on Samirchantrebjj.com.

Samir’s teammate Caio Terra was excited for his friend’s accomplishments and the strength of their Gracie Fighter team. “I want to thank all my teammates and friends for believing in me,” he says, “If you’re ever in San Jose, Dublin, or Pleasant Hill, California, come find us at the Gracie Fighter gyms.”

As for the Las Vegas International Open and passing the torch to Samir, Caio says, “I have a lot of respect for everybody who came here to compete.”