Drysdale behind the scenes at the ADCC. Photo: Carlos Ozório

Jiu-Jitsu coach to beasts like Forrest Griffin, Robert Drysdale was overjoyed at the last installment of the UFC, on December 12. On the occasion, he accompanied yet another fighter to win in MMA. Better  still was how Ricardo Pires black belt Frank Mir’s finish over Cheick Kongo came via guillotine choke after pulling guard, demonstrating the purest Jiu-Jitsu. In a chat with GRACIEMAG.com, Robert speaks of Mir, his recent health problems and announces that he’ll head into MMA full steam in 2010.

What did you think of Frank Mir’s performance against Kongo?

He’s improved a lot in Jiu-Jitsu, we have to hand that to him. His standup game is excellent too; standing with him is rough. He’s taking everyone down really quick. Cheick Kongo has high-caliber striking and he knocked him down quick, with one punch. Frank is training, determined, and will do anything to take on Brock Lesnar. He wants revenge, is going nuts for having lost and that’s all he talks about.

I’ve been working with Frank for nearly two years and we get along really well. It’s easy to teach him. Frank is a smart guy and you only need to show him a position once for him to get it.

Does he ever train in the gi?

We train in the gi when there’s no fight on the horizon. When there’s a fight scheduled, it’s all about specific training. For Cheick Kongo we based our training solely on his characteristics. But, that aside, we do train in the gi. Not much, but he puts on the gi and plays. It’s not a strong point of his or a main objective. 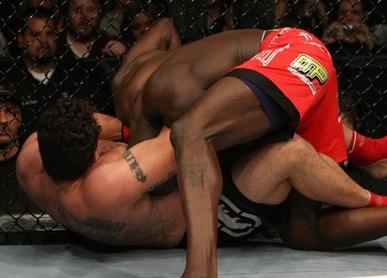 You had some health problems, but then you even did your supermatch at the ADCC. How are you?

It’s an aneurism, but I’ve already been cleared by medical exams. I went nine months without training my striking. I went to Brazil two weeks ago and the doctors cleared me. The aneurism is small, doesn’t need to be operated and there’s no risk to my life. I can be calm about it. I had an exam called an angiogram, which is specific for the problem. Now I’m waiting for the result to be translated into English to present to the athletic commission in the United States, for approval.

Athletic Commission? So you want to fight MMA?

I want to do three muay thai fights before doing MMA. I want more experience standing to get the feel for it, take some blows to the face. I want to do muay thai fights with knees and elbows. At around March, I plan to make my professional MMA debut. I’m not going to stop over Christmas and we’re training hard, Forrest Griffin, Frank Mir and me. Frank fought on Saturday and we were already training again on Tuesday. Forrest, even with a broken foot, is training and we’re all helping out. I haven’t stopped since the ADCC and 2010 will be my year. I had health problems and now I want to kick butt.

Would you like to send a message to GRACIEMAG.com readers?

I’m launching my website, drysdalejiujitsu.com, in January, and there’s a cool documentary about me on the Tapout site (www.tapout.com). It came out really cool. It lasts 30 minutes and is great. First class production, the guys even went to Barcelona to film the ADCC. It came out beautifully.