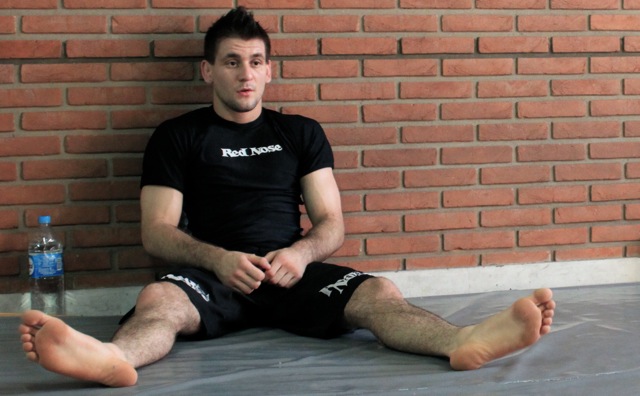 The current champion of the ADCC under-66kg division and owner of the world featherweight title in Jiu-Jitsu, Rafael Mendes doesn’t want to hear about anyone usurping his throne. To this end, the Ramon Lemos-produced fighter has been hard at it in training, left his gi in the closet, and been pumping iron hardcore as well. In a conversation with Carlos Ozório, the monster from Atos team recounted how his preparations for the September ADCC championship in England are going.

How are your preparations for the ADCC in Nottingham going?

I already knew this year was going to be a marathon because I couldn’t let myself lose the conditioning I’d achieved for the Worlds, so I didn’t want to let my body relax completely. I didn’t take much rest on purpose. In Brazil, my brother Guilherme and I are putting together our ADCC training timetable, with the positions and types of training to be done, so I’m still in the planning stage right now.

The first two weeks here in Rio Claro were all about adapting to No-Gi, so I trained with Gui, Frazatto, Leandro Brassaloto (another Atos black belt) and two purple belts, my cousin Eduardo Mendes and Jair Cofe. With their help I adapted quickly, also because I like training No-Gi, and when you do something you really like things flow naturally. This week Gui and I came to São José dos Campos, to Calasans Camargo academy, and we’re training with a good group. Gui has been leading training for us, helping us technically, and Claudio Calasans helps me a lot with the standup, correcting some aspects of my game. I feel I’ve been evolving a lot. The training’s been great, and we’re going to keep training with Calasans till the day of the event, alternating between Rio Claro and São José dos Campos.

How has your standup game been coming along?

I have a really open mind when it comes to training, and I look to learn and absorb the best of what each training partner has to offer. I’m always there asking questions and I feel that helps me evolve ten times more quickly. I like training with people who motivate me, who inspire me, and Calasans has got that. I always really liked training with him. God willing we’ll win the under-66kg and under-77kg divisions at ADCC 2011.

What makes the ADCC different for competitors?

The ADCC is one of the events I like competing at most, mainly for the prestige of the organization. I like the fact the referees aren’t competitors. I feel that’s a flaw in Jiu-Jitsu. I appreciate the work the federation does, bringing events to a different baseline, but I don’t understand why the referees are athletes who still compete. I could be in a final and the guy reffing is someone I beat in one of my previous matches, or even the teacher of the guy I’m facing. I’ve got nothing against the referees, nothing personal, nor do I have a solution for it. It’s just some constructive criticism that can help Jiu-Jitsu evolve as a sport.

How does your game change when not in the gi?

Taking off the gi and training for different rules following the Worlds motivates me in a different way. I adapt to the no-gi game quickly. The thing is to forget about grips and Jiu-Jitsu rules, to train thinking only of the event. I’m practicing positions to take my opponents by surprise, keeping my focus on trying to get the finish. At the last ADCC, in 2009 in Barcelona, the only match I didn’t get the finish in was the final against Cobrinha. I know this year I’ll have to be even better. You also have to have a full gas tank. After all, the last final lasted 40 minutes, so in the ADCC you have to be prepared for this kind of situation. My conditioning coach, Thiago Mendes, has been doing an excellent job with me and the gang at Atos. So far me, Frazatto, André Galvão, Calasans, and Chris Cyborg will be in it, but I think there’s still a chance some of the other athletes will get called up. We’ll see.

Are the ADCC rules more exciting in your view?

The rule whereby the first half of the match doesn’t count for points makes everything more dynamic, and it provides further incentive to go for the tapout. I feel that makes for livelier contests and more finishes.

Gui and I will do a seminar tour November in Australia. God opened doors for us to make our way to new places, so we can’t pass that up. Our lives have improved a lot through Jiu-Jitsu. We were kids when we started making a living for ourselves through a career in the sport, always seeking to evolve, and everything’s turned out as best it could. We forsake a lot of things, and now I promise to give my all at the ADCC, to compete determined to win. To the fans, I ask everyone to keep up with our daily lives through Facebook or our website, www.Mendesbrosfans.com.