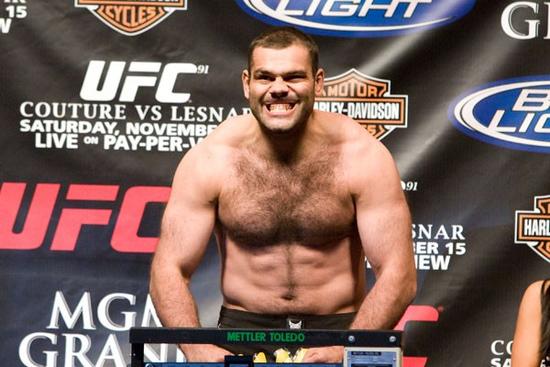 Called on to step in for an injured Rob Broughton against promotional first-time Ednaldo “Lula” next January 14 at UFC 142, Gabriel “Napão” Gonzaga is back.

“Napão” fought under the UFC flag between 2005 and 2010, fighting 12 times and winning seven of them. Back-to-back losses (to Junior Cigano and Brendan Schaub) resulted in his dismissal. After leaving the UFC, Napão won the belt of the Real Fighting promotion last October, and now he’s back in MMA’s most famed cage.

“My return comes naturally. I feel like I’d never left. The UFC is my home; they always treated me really well and I have lots of friends there. I’m excited about getting to see everyone again,” Gonzaga is quoted as saying on the Five Ounces of Pain website.

About his opponent, who has eight knockout wins in 15 career fights, Napão appears to be unworried. “I know what everyone else knows about him,” he begins. “Ednaldo ‘Lula’ fights on a big team. But at the moment I’m not worried about him; I’m worried about my training, and I’ll be much better trained for this fight,” the 2006 Jiu-Jitsu world champion remarked, hoping to return to his best shape—like he was when he fought Randy Couture for the UFC title in 2007.

“I’m ready to put in a great performance in the UFC again, and he’s just starting now at UFC 142. I want to thank everyone who collaborated with me in training here at Team Link. It’s been going great,” he says in closing.

The UFC 142 main event has José Aldo defending his featherweight title against Chad Mendes. Check out the card: