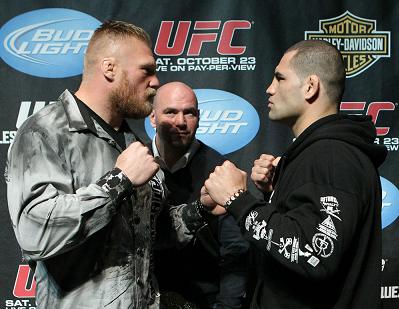 The greatest expectations for this Saturday night – there’s no denying it – is the title fight between Brock Lesnar and Cain Velasquez. The bout at UFC 121 in California will determine the promotion’s heavyweight title holder, as well as pit a fighter who blends brute force with technique against another who mixes speed, technique and a gas tank that won’t quit.

“I feel blessed and honored to be champion,” says Lesnar. “This is my second chance to reinvent myself. I’m an ex-amateur wrestler, ex-professional wrestler, former aspiring NFL football player. And here I am, a UFC heavyweight champion. So I do I see all that differently because of it? No. Do I go to bed holding my UFC belt every night? No. I go to bed, I put my children to bed every night. I don’t feel any pressure. I’m doing what I love to do,” added the mammoth-sized champion.

Faced with that, Velasquez remember his opponent’s last fight, when came within a hair of losing his crown, but won. Cain knows five rounds with the champion will be no walk in the park. Once the door to the octagon is closed, it will be war.

“I don’t think a lot of guys would have survived that first round of ground-and-pound Shane was throwing. He (Lesnar) managed to survive the first round, came back full steam in the second and got the submission,” he remarks. “For his size, he’s really explosive. He has a lot of power and moves well. So it’s not easy to find someone with all those attributes.

Lesnar, on his part, also respects his opponent.

“He brings some different challenges. He’s a smaller, quicker fighter and has good hands. He was never national champion, but was an All American, division 1 wrestler.”

Lastly, Cain promises a great performance in the tricky mission he has ahead of him.

“I got into this to be the UFC heavyweight champion. That’s the only reason I got into the sport, to be the best. And I feel that if I never capture the title, my career will have been mediocre.”

Check back with GRACIEMAG.com for more UFC coverage.