Learn tricks of the trade at Caio Terra seminar tomorrow 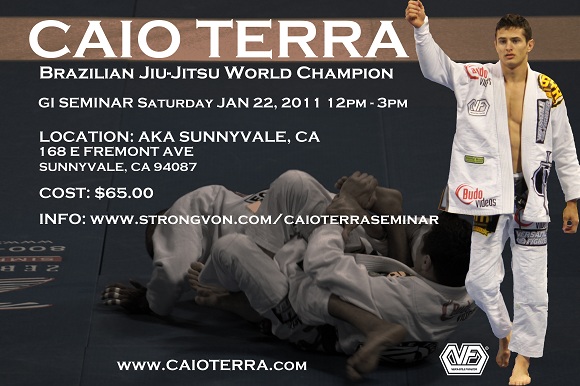 Here’s your chance to learn from one of the best: World Champion black belt Caio Terra! He’s giving a gi seminar this Saturday, January 22, 2011 from 12:00 p.m. to 3:00 p.m. at AKA Sunnyvale in San Jose, CA, and everyone’s invited to attend. Terra’s going to show the finer points on how to win competitions. “I’m going to show all the tricks people need to know on how to win,” Terra says.

If you are unable to sign up beforehand, you may show up the day of the event. The cost will be $80.

Terra recently gave a seminar at a Relson Gracie affiliate school in Phoenix, AZ. BJJ Revolution/Carlson Gracie Team black belt Jay Pages was there and he said it was the best seminar he’d ever attended. He reviewed Terra’s seminar on his website, and this is what he said: “Caio’s insight to his game, his approach, and his technique was a complete and utter eye opener for everyone. Even to a seasoned black belt such as myself, I’ve never picked up and retained so much information in a seminar as I did last night. As late as it was, I was bright eyed and bushy tailed with a star struck feeling about me. I felt like a kid in a candy store! I’ve never felt such excitement for BJJ technique in such a long time. Time actually went by fast. A part of me felt time went by too fast! We actually went over the scheduled time! Another difference I found in Caio’s seminar. Not too many instructors go over their time. That showed me he was sincere in teaching and sincere in the students learning. A seminar trait rarely found.”

To get more information on Terra and his seminar schedule, you can go to his website: caioterra.com

Next up for Terra: A seminar in Derry, New Hampshire on February 7, 2011 at Premier Martial Arts. Sign up now!