Jiu-Jitsu to break all barriers

Jiu-Jitsu shows how it’s possible to ease complicated situations and turn them around, whether in the dojo or in life. One of the greatest lessons of the mat is that there are ways to overcome the obstacle, regardless of what it is. Take Helio Gracie, for example, who through the gentle art overcame health problems during childhood, and adapted his game in such a way as to handle much bigger and stronger opponents. Helio in his day definitively revolutionized fight techniques, and debunked concepts considered solid up until that point.

The keyword is “adaptation.” The thousands of – maybe even infinite – possibilities well-learnt Jiu-Jitsu provides are adapted as best suited to each individual, without regard to weight, strength, age, sex… That’s the case with Gilberto “Gibs” Moya, a Marcos Barbosinha and Mario Dias black belt.

First let’s recapitulate, though: In March of this year, GRACIEMAG.com published an article about Russell Redenbaugh. Blind and missing fingers, Redenbaugh earned his black belt at sixty-five years of age. Excited about it, he didn’t hesitate to send us first hand news of him being the first person with such a disability to make it to the highest order. 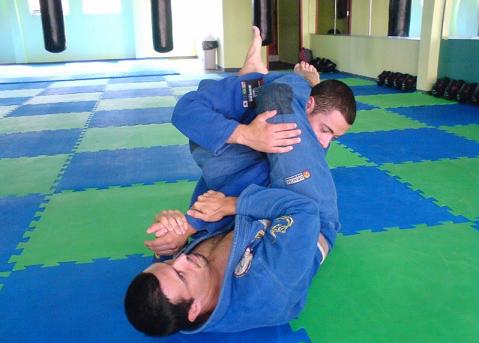 It didn’t take long for the newsroom to be flooded by messages asking to correct the error: Brazil’s Giba Moyano, 100% blind due to congenital cataracts, was a black belt before then, and his story deserves telling. Now twenty-eight years old, with fourteen years of gentle art experience, Giba was promoted on July 27, 2008. But Jiu-Jitsu changed his life definitively when he was still a white belt.

“I was a thirteen-year-old, and I was lost. It’s a phase where we naturally feel very insecure, and that was made worse because I couldn’t see. After six months I already felt a heck of a difference. Jiu-Jitsu provided me the psychological structure to face a lot of life’s other challenges,” Giba tells GRACIEMAG.com.

He made many advances through the martial arts. Besides participating in major championships, Giba now has Jiu-Jitsu as a profession, a way to make a living.

“I’ve been teaching at an academy in Praia Grande, coastal São Paulo, since 2004. Along with the many valuable lessons, Jiu-Jitsu also gave me the opportunity to work. Ten years ago I never would have imagined it,” he says.

The only thing Giba laments  is the fact that so few people with disabilities seek the martial arts.

“I’d love to do such work, but there isn’t much demand.”

Whether or not Giba is Jiu-Jitsu’s first blind black belt, truth is  it doesn’t matter. The main lesson is that whether the hardship is big or little depends, in part, on ourselves and the actions we take to turn them around. And always remember your great friend: Jiu-Jitsu will be your ally at all times!