Earlier this year, BJJ black belt competitor Jackson Sousa was suspended by Checkmat, cancelled from multiple gyms associations, and stripped of sponsorship by Shoyoroll; due to numerous allegations of sexual harassment, made by multiple women who described Sousa as predatory, manipulative, sexually inappropriate, and physically threatening.

Since then, Sousa has been allegedly cleared from allegations before a London’s Disciplinary Committee, as BJJ Eastern Europe has written previously. Following that, AJP Tour has announced that they will feature him at “The Abu Dhabi King of Mats Heavyweight” event in December:

However, the BJJ community decided to revolt against the decision. Mainly because it appears that no official documents about Sousa’s clearance of wrongdoing have been published – and because the investigation is still underway.
There have been repeated requests for the release of official documents, as has been emphasized by Meg He on her social media: 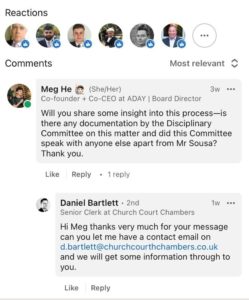 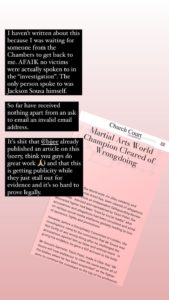 Therefore, the BJJ community is protesting against AJP Tour’s decision to bring Sousa back into competition. Meg He emphasizes that no victims have been contacted either:

This is a terrible idea. Just because Jackson Sousa paid off some barristers to form a “Disciplinary Committee” does not mean there was an actual investigation into it. No victims were contacted and the barrister chambers has so far sent no additional information about the Disciplinary Committee.
AJP: please ask for formal evidence first. You cannot allow sexual predators to compete at tournaments like King of Mats. 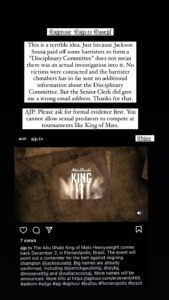 Well-known female Jiu-Jitsu athletes chose to make their voices heard immediately against the decision, such as Ffion Davies:

Surely they’re not actually having Jackson Sousa on this… AJP Tour what are you doing?
There have been plenty of accusations made, it’s barely been a few months – and he’s already being allowed to compete?! 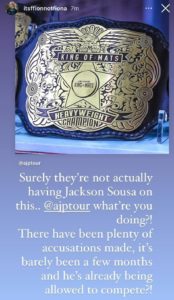 This is so disappointing @ajptour. Selecting him speaks volumes and we hear it.