Honeymoon in the gi for Lucas Lepri 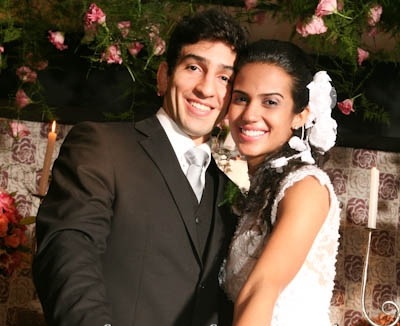 Photo from the newlyweds' personal archive

Not even as a newlywed does Lucas Lepri pass up the chance to compete.

Currently residing in New York, the Minas Gerais native landed in Brazil on the 26th of last month to wed his bride Mayara in Itumbiara, Goias, on Friday the 27th, and was already united with Sergio Moraes, Michael Langhi and the gang from Alliance in São Paulo by Monday, to train for the World League Pro tournament on December 5th and 6th.

And the sacrifice was well worth it. Lepri added another lightweight title to his CV, and fattened up his bank account by three thousand reais, to help with the happy couple’s expenses.

In making it to the top of the winners’ podium, he overcame four opponents. In the first match he finished with a forearm choke. In the next he took the back. In the semifinal, he won by a score of 3 to 0, from a guard pass and in the final he came up against a game Moacir Mendes, a judoka who Lucas knew nothing of.

“I won the final by a score of 2 to 0. The kid was real tough, that Moacir. I think he comes from judo. I tried to throw the kid down, but he would just get right back up again. He was like a cat, would hit the ground and get right back up. So fast. Really tough, but it was great to be champion,” Lepri told GRACIEMAG.com.

Lepri’s performance drew praise from all at Alliance: “Lepri left Fabio Gurgel gawking. He came straight from his wedding and, at the World League Pro, passed some really tricky guards like a knife through butter,” said friend and black belt Elan Santiago. “His wife stuck a wedding band on him that’s like something out of Lord of the Rings. All he has to do is take it off to train and alarm bells go off at home. I think there’s some kind of GPS chip in it,” chides the friend.

And Lepri confirms the tight watch his wife is keeping on him. “Mayara is a tough nut to crack. She calls all the time. She marks me closely. Can’t make one false step, she’ll catch me,” says the joyful groom.