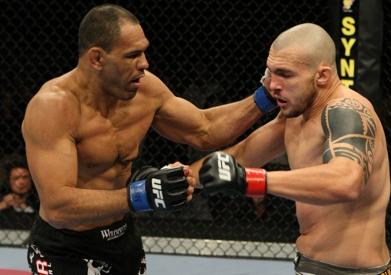 Now it’s official: “I signed today. It’ll go down on May 29,” said Rogerio Minotouro to GRACIEMAG.com, this Wednesday night.

The aforementioned statement refers to the fight with Forrest Griffin, his next challenge in the UFC, a matchup GRACIEMAG.com has commented on in recent months.

Griffin, a former light heavyweight champion, is coming off a win over Tito Ortiz at UFC 106. In his first appearance in the UFC, in November, Minotouro had a solid 1st-round knockout win over Luis Banha. The bout, which would put the winner at the top of the weight group, was wished for by the fighter.

“That’s right, I asked for this fight. I wanted to figh thim,” says Minotouro.

“Forrest is a standup fighter, is aggressive, and I like that. He also has absurd stamina and excellent Jiu-Jitsu,” he says in praise.

To Minotouro’s delight, the fight is now set in stone. Nevertheless, he has many reasons to celebrate. Last Monday, January 25, Valentina was born, marking the Brazilian’s debut as a father.

“It’s awesome. Being a father is a great feeling, but also a great responsibility. She’s beautiful, took after her mother!” he said chuckling.

Stay tuned to GRACIEMAG.com for more news on the UFC.