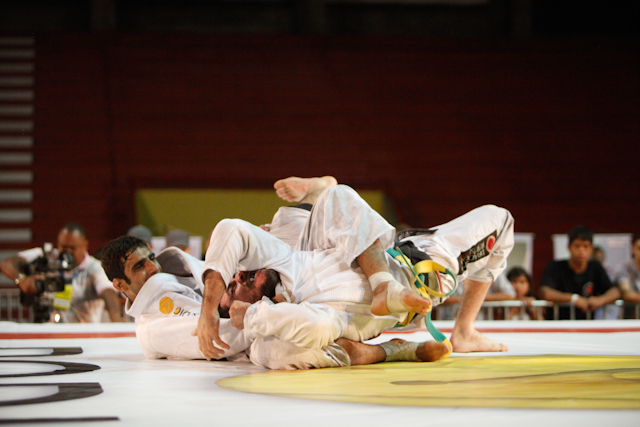 Lo gets the finish and takes top spot on the podium. Photo: Ivan Trindade.

Leandro Lo arose as the big winner of the Copa Pódio lightweight GP in Porto Alegre this Saturday.

In the first semifinal of the night, Lo (Cicero Costha) opened the scoring by passing the guard of Vinicius Marinho (Soul Fighters/GFTeam). Marinho replaced Augusto Tanquinho in the match and did a good job of it, scoring two points of his own. It was too little too late, though, as Leandro outpointed him by 3 to 2.

The second finalist arose from the match between Claudio Caloquinha (GB BH) and Ed Ramos (Atos), the second semifinal. Caloquinha started out taking a two-advantage point lead, controlled the action, added another one, and went through to the final.

In the grand decider, Lo submitted Caloquinha with a bow-and-arrow choke at 5:14 minutes on the clock, making him the big winner of the event.

The battle for third didn’t end up happening, as an injured Vinicius Marinho was unable to step in against Ed Ramos, who was awarded third place.