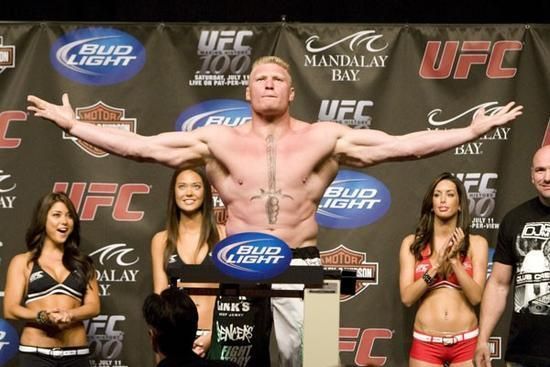 UFC heavyweight champion Lesnar nearly had to give up his career. Photo: Josh Hedges

Brock Lesnar put the questions regarding his return to the Octagon to rest. In an interview with ESPN channel’s “Sports Center” show, the UFC heavyweight champion spoke of the health problems that nearly ended his career.

Besides mononucleosis, the fighter suffered diverticulitis, an inflammation of the large intestine.

“I had a hole in my stomach,” said Lesnar, who admits to having changed his view on life since the problem.

“I always had control over my life. The for some days I didn’t have control over anything. I thank my family, Dana White and the UFC a lot for sticking by my side.”

The fighter’s case was serious. Brock lost around 18kg while in hospital. He was unable to eat or drink and was close to having to undergo an operation to remove his colon.

“I returned to the gym and recovered the weight. When I went to the doctor, on January 5, they were perplexed. They didn’t find any signs of trouble in my stomach. It’s a miracle to me,” he said.

I’m still the heavyweight champion of the UFC” Brock Lesnar

Without a date for his next fight, Lesnar will have to watch on as Frank Mir and undefeated Shane Carwin dispute the interim heavyweight title on March 27, at UFC 111, in New Jersey. Nevertheless, he makes abundantly clear what the situation in the heavyweight division is to him:

“Let’s be real clear about it: I’m still the heavyweight champion of the UFC.”