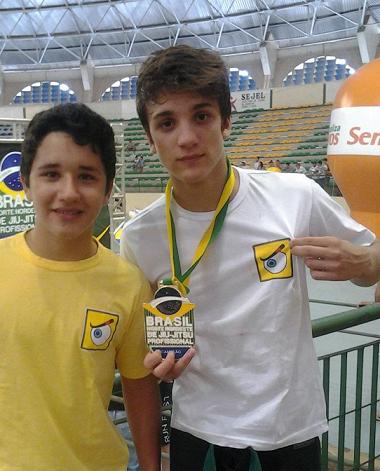 CheckMat black belt Helder “Bob Esponja” Medeiros is celebrating the arrival of new athletes on the scene. At the North/Northeastern Brazilian championship last weekend in João Pessoa, in the Brazilian state of Paraíba, one of his students made it to the top of the podium. The gold medal was captured by still-green belt Nicolas Hluchan.

The proud, overjoyed professor heaps praise on the new talent of just 15 years of age, “This kid is awesome, he won the Brazilian Nationals and now the the North/Northeastern. He’ll be a great champion down the road! I’ve seem talent come up the ranks over the years and Nicolas is one of the greatest I’ve ever seen. We’re doing some serious work with the kids, and they’ll be giving everyone something to talk about,” says Helder.