Belfort: “I have a feeling only Shogun’s going to win easy” 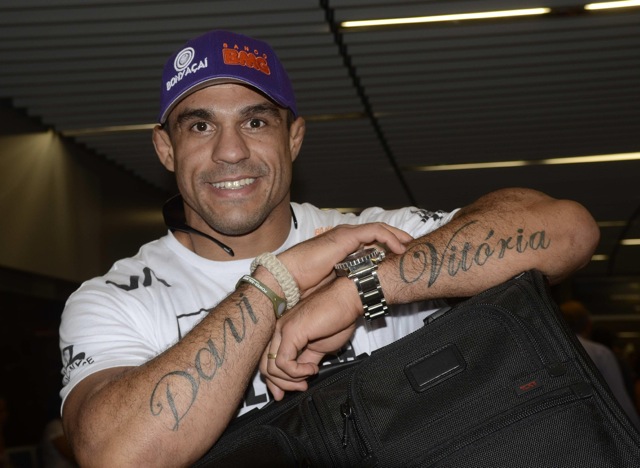 In the days leading up to UFC Rio, the event and possible results are the only things on anybody’s tongue. Even when it comes to the stars of the show, as GRACIEMAG.com saw yesterday at an event sponsored by Budweiser beer in the Leblon neighborhood.

With top dog Lorenzo Fertitta in attendance alongside his bodyguards Rickson Gracie, Ricardo Arona, Antonio “Pezão” Silva, Kyra Gracie, Amaury Bitetti, Rogério Minotouro, Milton Vieira and other stars, like actor Daniel de Oliveira, the party also featured a first-rate team of fight analysts. Of the celebrities on hand, nobody received the level of fan attention Vitor Belfort did – being famous as a UFC star and for having made numerous appearances on Brazilian TV and all.

Vitor, with his famous wife, Joana Prado, by his side, is the UFC ambassador in Rio, attending to all the press, fans, friends and the just-plain curious, even losing to a number of them when playing a video game (he lost to Shogun played by a unmatched American player, drawing a victory cheer from an opposing fan).

Following a exhaustive session engaging any and all, Vitor and Joana had a chat with GRACIEMAG.com about the main fights featuring at UFC Rio. While the television muse said she hopes to be up by the cage to see everything up close “where the fighters’ sweat lands,” Belfort, the commentator for Rede TV! Network, explained what he expects from the three main fights:

“It’s a long shot, but I think Shogun has an easier fight than Anderson or Rodrigo do. If he doesn’t do anything crazy he’ll run right through him. Forrest is tough, but Shogun is better than he is. I have a feeling that, of the three, only Shogun will win easy. He’s better standing and on the ground, and he’s motivated to get the belt back and have revenge on Forrest.”

“Rodrigo has a number of obstacles to overcome: he underwent surgery, his opponent is an extremely tough and focused up-and-comer. But Minotauro’s Jiu-Jitsu can show up when things are at their worse, as always. But it won’t be easy, Brendan’s the favorite.”

“Anderson is the firm favorite but, if he gets too high and mighty, he ould lose the title. I’m rooting for him but I feel Okami is really well prepared, very focused on getting this belt.”