If you do Jiu-Jitsu, try imagining a more pleasurable way to spend Christmas than the one Vitor Belfort will have in Las Vegas, with his family, trainers and training partners at his future gym.

A aim of the effort isn’t just to win, it’s to put on a show-stopping performance for his hometown crowd, when he steps into the octagon January 14 at UFC 142 in Rio de Janeiro.

Conditioning coach Alvaro Romano was one of those invited to the party, and he has decided to share a bit of what he has been going through and commented on how satisfying it was to work with UFC welterweight champion George Saint-Pierre–as well as the likes of Brendan Schaub, Nathan Marquardt, Phil Davis, Ross Pearson and UFC bantamweight champion Dominick Cruz. 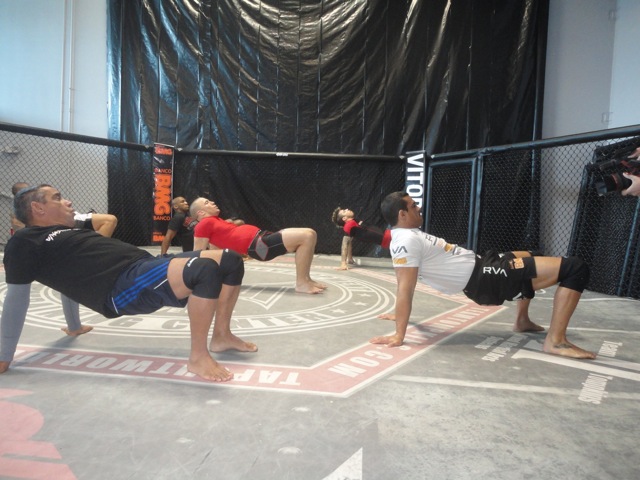 Alvaro Romano warms up with Belfort and GSP. Publicity photos.

“Every single training session has been great – and not just the Ginástica Natural training. There’s a great exchange of information going on between the athletes and coaches,” said Romano.

“Having worked with fighters all these years, what impressed me most was how humbly GSP accepted new approaches. We talked a lot about physical conditioning, and he made a point of getting in on the pool training I’ve been doing with Vitor. I showed him and the physiotherapist Salviti some post-training recovery techniques, and Salviti, who’s good people, showed us physiotherapy techniques. He and his trainer participated in everything and really liked it,” he added. 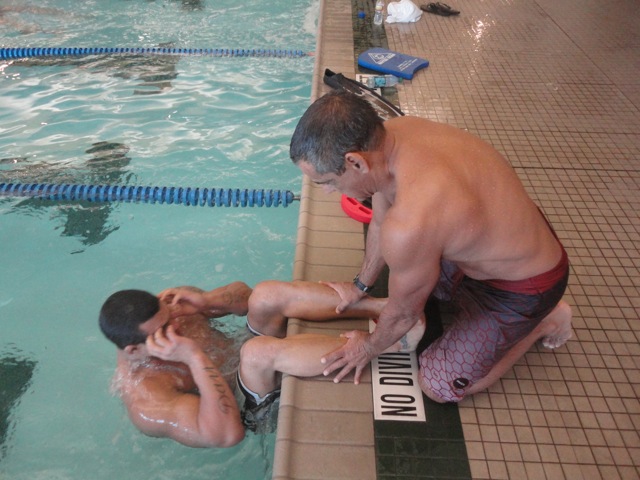 Vitor in the pool

GSP is coming off two knee injuries but is almost shipshape again. Now Vitor, according to Romano, is “on fire”:

“Here in Vegas, training sessions always kick off with Ginástica Natural, so it was cool for GSP and the guys see the different quality of training when it follows a good warmup. We did a good job of planning; he’s done a good job of combining speed and quality when performing fight moves,” he explains.

On the training of Jiu-Jitsu aces like Marcus Bochecha and Gilbert Durinho, Alvinho says they’re getting more impressive with every session.

“GSP and Vitor worked on everything: grappling, takedowns, specific positions. With the team we have assembled here, the Jiu-Jitsu has been a chapter all its own and has been impressing everyone – training between Durinho, Cezar “Mutante”, “Bochecha” and Vitor are off the hook; it’s been a pleasure to see. The whole gang is showing a bit of what their Jiu-Jitsu’s like, and they’ve been really dedicated to training,” said the trainer in finishing. 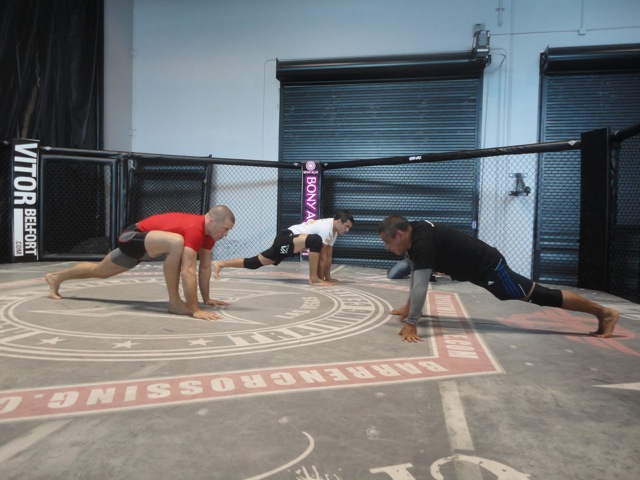