At the 2006 Worlds in Brazil, one quarter-final match stood out. Against Andre Galvao, who would then go on to submit Nino Schembri and hit a dead-end at Marcelo Garcia, Antonio Sérgio, otherwise known as Canudo, sunk an apparently inescapable armbar. The heart of Galvao, who spent a painful, long time with an overextended arm, drew the attention of a distinguished observer, Wanderlei Silva, who then hired the black belt to take over his Jiu-Jitsu training for MMA.

Returning to the one who performed the armbar, after the match Antonio Sérgio disappeared from the scene. Holder of such titles as the Brazilian National Championship and other major competitions, where could Canudo be?

Canudo stretches out an arm at the European. Photo: Anderson Fetter

For anyone who kept up with the European Jiu-Jitsu Championship, that’s easy to answer. Canudo, who now lives in Portugal, attended the last four editions of the event, winning all of them. In the most recent this year he had 12 matches, all concluded before the final whistle, which earned the black belt the nickname of Mr. European.

“After closing out the medium heavyweight adult division in 2007, with Raphael Abi Rihan, fought as a master the next three years and won at weight and absolute, as well as the National Team tournament. At this year’s I had three matches in the adults National Team Championship, four at weight (medium heavyweight) and five in the absolute. I got the submission in all but one in which the opponent was injured. But his arm was well extended when he asked to stop. Most were by armbar, but I also got the choke,” says the Brazilian Fight and Carlson Gracie representative. 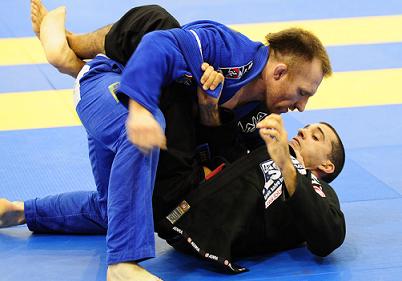 Canudo against some stiff competition from Poland. Photo: Anderson Fetter

Based in Cascais, Portugal, Canudo just finished his master’s degree in Physical Education and is now preparing for his doctorate. The fighter discusses the evolution of the gentle art in the country.

“I do the gang’s physical conditioning and will even work with an MMA fighter, Vitor Nóbrega, here. I train here with Sergio “Telinho” Vitor, who was a student of Leo D’Ilha in Brazil. Jiu-Jitsu is growing here with every year, it is well known. We see that in the number of practitioners in the academies. But here in Portugal there’s a problem: there aren’t many championships. For those accustomed to always competing, it’s very different. I’m here all year round focusing on a single event, the European. Jiu-Jitsu is growing a lot here, but there are no more competitions, “he says.