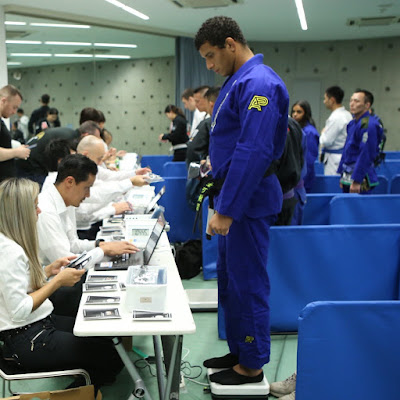 OFFICIAL WEIGH-INS CONDUCTED AHEAD OF ABU DHABI GRAND SLAM®TOKYO AT THE OTA GYMNASIUM
Black belt superstars Daisuke Sugie, Vitor Shaolin and Amal Amjahid made weight ahead of their highly anticipated matches.
Tokyo, Japan, 28thJuly, 2018: The UAE Jiu-Jitsu Federation®, the official authority for the sport of Jiu-Jitsu in the United Arab Emirates, conducted the official Weigh-ins today at the OTA Gymnasium, ahead of Abu Dhabi Grand Slam® | Tokyo.
Black belt world champions; Amal Amjahid, Claudia Do Val, Mayssa Caldas, DJ Jackson, Kaynan Duarte, Rudson Matheus, Guttemberg Pereira, João Gabriel Rocha, Gerard Labinski, among many others made weight ahead of their highly anticipated fights.
“The training camp and weight cut couldn't have been better for me. I am competing in all the Grand Slams and World Pro events, I am already feeling the buzz here, can’t wait for tomorrow. Jiu-Jitsu is about finesse and technique, not strength, so that is what all the fans will get from me tomorrow.” said Amal Amjahid, Female Adult Brown/Black belt, 55kg
“I make the 70kg weight easily, so I am rarely dehydrated or anything. I am very happy once again to compete in the new season of the Abu Dhabi Grand Slam, it’s a joy and thrill to challenge top players in the game and that is what is on offer at the UAEJJF tournaments. I want to thank all my fans, especially here in Tokyo, see you all tomorrow” said Claudia Do Val, Female Adult Brown/Black belt, 70kg

EVENT AND BROADCAST
The Abu Dhabi Grand Slam® in Tokyo will begin at 9:30am until 18:00pm (Tokyo standard time) at the OTA Gymnasium. Catch the action live on Abu Dhabi Sports in the UAE & MENA region, Combate in Brazil, FloGrappling worldwide stream and Airtel TV, Jio TV, Idea Movies & TV, Triple Play IPTV in India.
The show will also be broadcasted on delayed basis on FOX Sports in Asia, Fight Network in Canada, Europe and MENA, ABS-CBN Sports in Philippines, Astro in Malaysia, Starhub in Singapore, Orange TV, IndiHome, My Republic in Indonesia, SCTV in Vietnam, EB-TV steam in Asia, Singtel in Singapore and Australia, SFR Sports in Europe, Super Sport and Azam Sports in Africa, Fight Sports in Caribbean, North America and Europe, Eleven Sports in Europe, Sharjah Sports and Dubai Sports in MENA.