White in “O Globo”: Brazilians are good “because they’re not lazy like Americans” 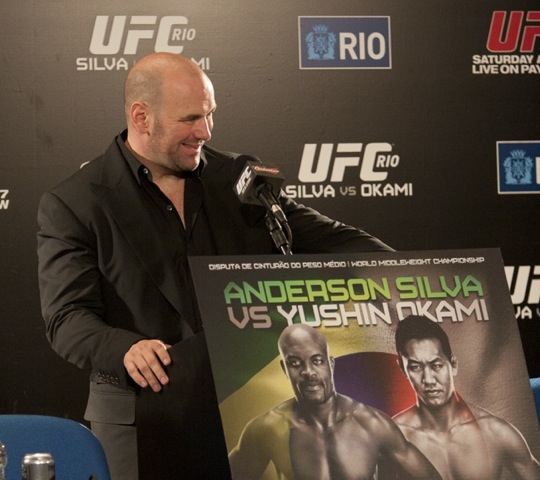 Dana White, rocker president of the UFC, in photo by Gustavo Aragão

On getting to see Rio and interact with the locals, it dawned on UFC president Dana White just why Brazilian fighters have been so successful.

First, of course, because Brazil is where vale-tudo (now MMA) and Jiu-Jitsu first started. But Dana also saw another reason, one having to do with one of the cardinal sins, according to an article in yesterday’s “O Globo” newspaper.

“From my hotel window (in Ipanema) I could see 30 people surfing, 20 playing volleyball, 50 running. These are the most active people in the world. They’re not lazy like Americans, who sit around eating fast food all day,” said Dana White, who is becoming ever more intrigued by the Brazilian market.

“There’s poverty, sometimes despair, a lack of trust. Those who have never practiced martial arts wouldn’t understand but once they start they feel more powerful, confident. Soccer is a way to make it for a lot of kids, but not all of them will make it big. And a lot of them could become fighters,” said White, who trains in boxing and Jiu-Jitsu.

Also in “O Globo” newspaper, in a column by Guga Noblat, Anderson Silva accepted a fight with Jon Jones, the dreaded champion of the division above Silva’s. It is said the “Spider” only asked that he not be made to give up his middleweight belt. According to the columnist, the higher-ups at the UFC want the fight to happen but only if Anderson were to surrender his title and move up to the light heavyweight division. Truth or rumor?