The destruction in Texas caused by Hurricane Harvey continues to spread, with thousands upon thousands of people finding themselves displaced by record levels of flooding. The scope of devastation has left the rest of the country wondering what they could do to help those affected, and today, Fight to Win Pro CEO Seth Daniels stopped wondering and started doing.

Daniels is originally from Katy, Texas, and while he now lives in Colorado, he has lots of loved ones (including multiple F2W coworkers) from the Houston area, where the damage is most severe. As he continued to see post after post depicting the effects of the storm, Daniels knew he had to help in whatever way he could. So today on Facebook, he made an announcement that all profits from F2W Pro 46 in San Antonio, the Texas Open in San Antonio, and F2W Pro 47 in Houston would go directly to victims of Harvey in the jiu-jitsu community. 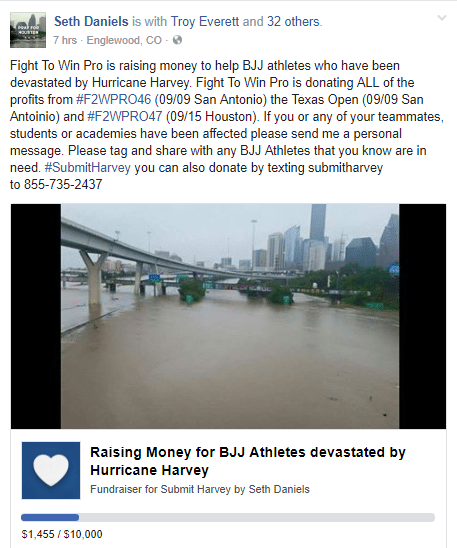 Initially, Daniels debated simply cancelling the events knowing that for most people competing or attending a jiu-jitsu event wouldn’t be at the top of their list of priorities. But knowing the effects that something good and exciting can have on people in tough times, he decided to keep the events on the schedule and donate the proceeds. “I don’t want to bail out and cancel events,” he says. “I want to give people something to look forward to. Even if I lose $10k or $20k from doing this, I just want to be able to help in whatever small way I can.”

Daniels has helped raise hundreds of thousands of dollars for different organizations throughout the years, and he’s using his experience to maximize the impact he can have on people affected by the storm. He’s also set up a donation page on Facebook that’s already raised almost $1,500 of its $10,000 goal in less than a day, and he encourages anyone in the jiu-jitsu community who needs help or knows someone who needs help to directly message him so he can put them on a list of people who would receive the money once the F2W events conclude.

By doing things this way, Daniels has hope that he’ll be able to make a big impact for people who need it most. “I have nothing against organizations like the Red Cross, and they do a lot, but I feel like you don’t always know where that money goes. I’d rather donate to individual people who need it and know that it’s making a significant difference for them,” he says.

To donate and help the jiu-jitsu community in Houston, check out the donation page on Facebook. If you, a teammate, coach, or student needs assistance, message Seth Daniels directly.