Saturday of affirmation for BJ and Frank Mir 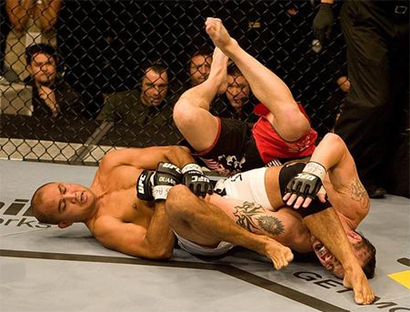 BJ Penn lands an armbar in a photo by Josh Hedges

After a memorable UFC Fight Night last April in Nashville, the UFC returns to the state of Tennessee, to provide fans with another mixed martial arts spectacle.

Lightweight champion BJ Penn faces his toughest test in the under 70kg division, Diego Sanchez. The show will be held live in the FedEx Forum in Memphis, on Saturday, December 12.

“Sometimes it takes an athlete years to find out in which division he is best,” said UFC president Dana White. “I think BJ Penn and Diego Sanchez finally found their homes in the lightweight division. It will be the best performance from Penn and Sanchez ever seen,” Dana adds.

Unbeaten in the lightweight category for eight years, with nine finishes in ten wins, Hawaii’s BJ Penn has overcome such top-caliber opponents as Joe Stevenson, Sean Sherk and Kenny Florian. At 30 years of age, the lightweight champion and former welterweight champion defended his title against Florian in August of this year, at UFC 101, displaying the best form of his career. He beat his opponent with a 4th-round rear-naked choke in an impeccable performance.

Another challenge has arisen in Penn’s career. This Saturday he faces Sanchez, the winner of the first season of “The Ultimate Fighter”. “I’m anxious to defend this title. I know what kind of athlete Diego Sanchez is and that’s why I trained so much. This will be a great test,” said the lightweight champion.

Diego Sanchez reinvented himself as a true fighting machine. At 27, the New Mexico native has collected superb wins against Joe Stevenson and Clay Guida, since dropping divisions. The fight with Penn marks his first title challenge.

“I always wanted to fight the best fighters. I’ve worked hard for that and I’ll finally have a title challenge. I’m training harder than ever and I expect a war in the octagon,” said Sanchez.

And there’s more. UFC 107 also features two-time heavyweight champion Frank Mir’s return to the octagon in pursuit of a third title in the most difficult division in the championship. Mir won three of his last four fights, beating Antonio “Minotauro” Nogueira, Brock Lesnar (in February of 2008) and Antoni Hardonk. Nevertheless, his last outing was marked by a crushing loss to Brock Lesnar at UFC 100. He will need, therefore, to catch his breath against the devastating attack of opponent Cheick Kongo.

“I’m coming off a loss and I definitely want to get back on the path to the title. This will be a great challenge since Cheick Kongo is one of the best of the UFC,” said Mir.

Like his adversary, Cheick Kongo won three of his last four fights, having beaten Antoni Hardonk, Mostapha Al Turk and Dan Evenson, and comes off a loss to Cain Velasquez. Kongo knows a win over a star like Frank Mir could get him closer to the belt. “In the UFC you aren’t given easy opponents. But when you face a former champion at Frank Mir’s level you expect the toughest fight of your career. It will be a classic,” said Kongo.

Who do you tip to win? Check out the card and comment below.