Ricardo “Cachorrão” Almeida told GRACIEMAG.com today that news going around about his fight against Thiago “Pitbull” Alves at UFC 111 in March is no more than a rumor.

Cachorrão did confirm to GRACIEMAG.com, though, that he will fight at UFC 111 on March 27, just that he has no set opponent.

Back at work after sidelined by a knee injury, Cachorrão further elaborated on his recovery and expressed his desire to climb the ranks in the UFC welterweight category.

Check out the interview with Cachorrão held this Wednesday.

Cachorrão, news that you may fight Thiago Alves has been circulating in the international press. Can you confirm it?

I’m set to fight on that card here in New Jersey, UFC 111, on March 27, but I don’t have an opponent yet. A lot of rumors are going around on the internet saying I’ll face Thiago Alves; but yesterday I talked to the UFC and they said that’s not the matchup they want to make right now.

So you are saying those are rumors from the press?

They’re rumors. I don’t know where they come from. Maybe they called up Thiago trying to set up this fight and Thiago did or didn’t accept. I don’t know what happened. I know I saw the rumors from all sides. An MMAJunkie journalist even called me and I told him I hadn’t heard from anyone about it yet. For now I’m just training to be 100% when I fight. My sights are set on UFC 111.

Speaking of which, both Jon Fitch and Thiago Alves would be really tough opponents, were you to be matched up against them, wouldn’t they?

Of course. Both just challenged for the title, beat pretty much everyone in the division they would need to beat. Fitch has been beating a ton of people, only losing to St-Pierre. Now Thiago Alves beat Josh Koscheck, Matt Hughes, Karo Parisyan, a lot of guys. He only lost to St-Pierre, too. So either of them would be a hard nut to crack. But that’s what I’m here for, right? I had a few fights at middleweight; it’s been about two years since I returned to fighting and I think time has come to start facing the top guys in the division. I’m dropping to a lower weight class; the circumstances change a bit, but I think from the position I’m in, for my last few fights and wins, I feel it is fitting that I start fighting the top guys and see where my game is, to move up in the pecking order. 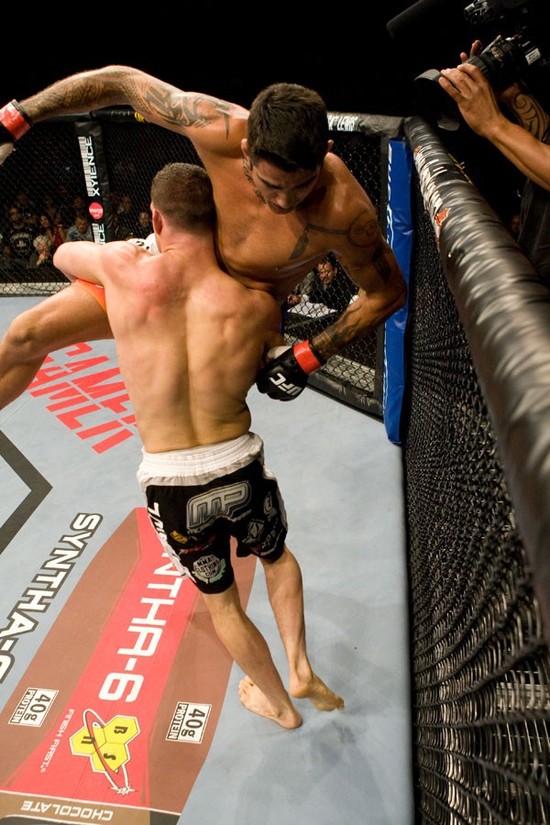 How has your recovery been going? Will you be much better in January?

Recovery in recent weeks has been much quicker than in the early ones. I trained well today, without pain. My only misgivings are about getting hurt. But I think that’s just in my head. At least for the coming months I’ll protect my knee while training, so as not to hurt it again. At the moment I’m not feeling any pain whatsoever. I feel a bit when I get up in the morning, or if I sit for a long time and get up.

How did you injure your knee?

Training Jiu-Jitsu at Renzo Gracie’s academy. I was passing guard and my knee twisted outwards and tore the meniscus. But I’m already in physiotherapy. It’s been nearly six weeks. I’m doing strength and flexibility work, ultrasound and ice treatment. In the coming weeks I’ll have returned to training as usual, but being careful.