Rashad Evans and Thiago Silva face off with Machida in mind

Lyoto Machida was a decisive figure in the careers of both Rashad Evans and Thiago Silva. That’s what could be discerned from statements made by the fighters at the press conference held in the build up to UFC 108, to take place January 2 in Las Vegas.

Responsible for the lone blemishes on the records of Brazil’s Thiago Silva and former light heavyweight champion Rashad Evans, Lyoto provoked a change of perspective in both fighters.

Thiago Silva said he’s more objective and less emotive now, and the difference was apparent in his recent win over Keith Jardine.

“Without a doubt after the Lyoto fight I learned to be a less emotive fighter. I have to agree with Rashad when he says my style changed for the Keith Jardine fight. It’s a new, more objective and less emotional game,” stated the Brazilian.

Rashad Evans, Thiago Silva’s opponent on January 2, also sees changes in the way he carries himself in the octagon since facing “The Dragon” Machida.

“The loss to Lyoto made me more humble. I learned to listen more to what people have to say,” he remarked.

The American, though, isn’t thinking about Lyoto nor his rivalry with Rampage. His primary focus now is called Thiago Silva.

“There isn’t a bit of me that’s concerned with fighting Quinton Rampage,” he said. “I’m 100% focused on Thiago. This fight is everything to me and I don’t need to project what will come afterwards.”

Thiago Silva, though, was straight to the point and didn’t hide his wish to pass Rashad and go into a rematch with Lyoto. 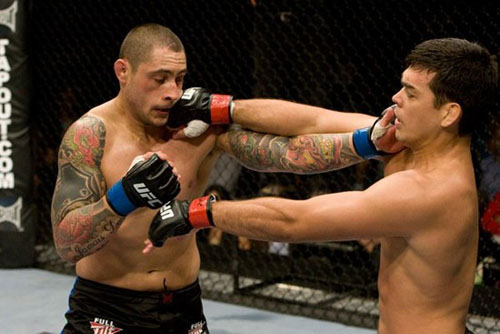 “I have no resentment whatsoever for Rashad. It’s just my job. Beating Rashad would put me in line to fight Lyoto and that’s what I want,” said Thiago in finishing.

The year 2010 starts off a heated one for fans of a good bout of MMA. And GRACIEMAG.com will be tuned in to keep you up to date on all the goings-on at UFC 108.