After his win over Jacob Volkmann, Paulo Thiago spoke with GRACIEMAG.com about his next challenge in the Ultimate Fighting Championship. The police officer on Brazil’s elite BOPE squad will face Josh Koscheck once again at the February-6 UFC 109 event in Las Vegas. The last time the two faced off, on Paulo’s debut for the organization, the Brazilian won by knockout. Some said it was luck, the rematch could prove otherwise. Check out the interview. 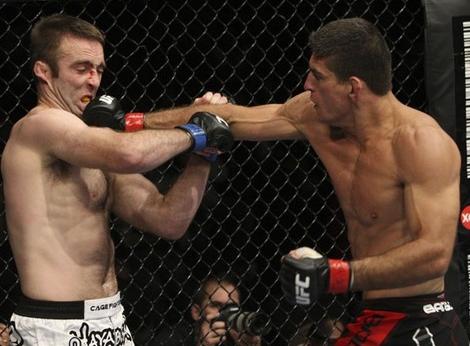 Paulo Thiago in his last UFC win, in a photo by Josh Hedges

If the guy is good, that’s the guy I want to beat

That’s right. A lot of people said the first time was luck. I can tell you I’m going to train a lot to beat him again.

Are you bothered people think the first time you won by landing a lucky punch?

People said it was luck, but it was a sequence I practiced a lot for the fight. It didn’t just happen, it was well rehearsed. I think it’s awesome I get to face him again. They put him in my way again and I can only thank them for it. I will again face a highly regarded fighter and to me it will be a pleasure.

But you don’t feel you should move up the line and the organization come up with a different opponent?

I do what they say. I can just be grateful to the UFC and face who they tell me to. I don’t pick my opponents.

If you beat Koscheck again you may be in line for a title challenge, am I right?

I try not to think about the title, just one fight at a time. But, for sure, he could get me closer to the head of the line, waiting my turn. He and Jon Fitch are the two who are closest now and, beating him, I’ll be well placed, too.

You come from a Jiu-Jitsu background, but have won with striking and encountered the greatest danger in the UFC on the ground. Will you work more on your Jiu-Jitsu?

The guy I faced (Jacob Volkmann) is not unversed on the ground, he was a three-time wrestling champion in the United States. He’s no joke, he’s really good. I really did try and get up from the bottom any way I could and could have worked a bit more from the guard. I ended up wasting a lot of gas unnecessarily. But I’m going to work on my ground game, as I will with my striking. I want to be the best fighter and will continue training everything, more and more. That’s the way it goes.

Would you like to say anything to your fans on GRACIEMAG.com?

You can be sure I’m going to dedicate myself a lot to my training. I never go in with the thought of folding or chickening out because I’m facing a top fighter. That doesn’t happen with me. If the guy is good, then he’s the one I want to beat. You can rest assured, I’m going in full steam.