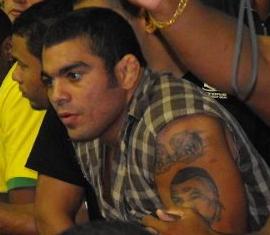 In the final stage of his preparation for Bitetti Combat, to take place this Saturday, December 12, Paulo Filho relied on help from Jiu-Jitsu team GFTeam. The fighter worked out at the team’s MMA headquarters, Max Fit.

“I would like to officially announce that fighter Paulão Filho is now part of GFTeam/Max Fit’s MMA team. He contacted us and, on Tuesday of last week (December 1), we met and decided to work together,” team spokesman Leandro Cabral told GRACIEMAG.com.

The athlete’s training started the next day, Wednesday, December 2, and took place in two periods.

“We are aware that it was very close to fight time, but the dedication, effort and, mainly, the joy the athlete has shown has motivated the group as a whole. We know Paulão’s potential and the professionalism he has exhibited made us all very hopeful for a victorious future,” says Leo.

“This Saturday he won’t yet be at the ideal point we planned for, but, certainly, everyone will have the opportunity to see a much different Paulão from the one they saw at the Maracanãzinho. Paulão leaves for São Paulo accompanied by Huanderson Pavão, one of our MMA coaches, and Jiu-Jitsu black belt Rodolfo Vieira,” he says in finishing.

Anyone who wishes to keep up with the team can do so by visiting their blog, http://gfteam.blogspot.com, or by following them on Twitter.