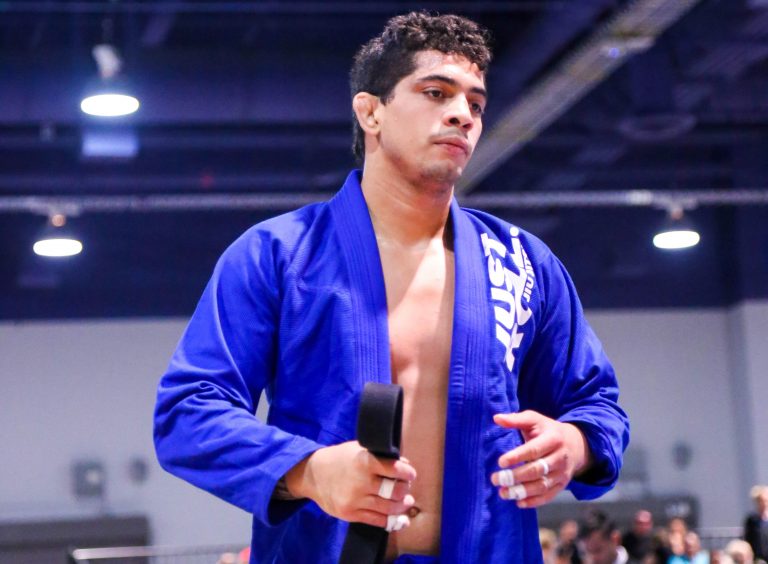 Manuel Ribamar has finally won his first major title as a BJJ black belt. At 26, he was the best medium heavyweight athlete at the No-Gi World Championship, which ended last weekend in Anaheim, California. Rodrigo Pinheiro’s pupil had three fights in the division. First, he scored 9-0 on Lucas Rocha (ZR Team), then he beat Mathias Luna (Checkmat) by advantages and, finally, he dominated the action against Gabriel Almeida (Checkmat) to secure the title.

Although now a champion, Ribamar almost gave up competing in the 2019 edition of the No-Gi Worlds. Because of his engagements as manager of his own academy, with just over a month of existence, he didn’t have as much time to train as before. The encouragement from his wife, Nathiely, and his faith were essential to his arriving confident on the day of the event.

“It’s only 1 month and 2 weeks since we opened our gym in Texas,” he said in a post-title interview. “Nathiely and I are responsible for running our own business, so we had to give up a lot of things to make me champion. Nathi, for example, has stopped fighting to teach at our school. We have classes from 6 a.m. until 8 p.m. and I need to be present at all times.

“I didn’t have much time to prepare. In fact, I only had three weeks to fight in an event of the size of the No-Gi Worlds. I just had the competition training and the complement, other than my students helping me the way they could. My teacher Rodrigo got a lot out of me in the training sessions I was attended. When I couldn’t train without a gi, I compensated by working on the physical aspect.”

Ribamar added: “I have to mention here the group of people who were praying for me and the athletes who would compete during Bible studies, which I do every Tuesday and Friday. I have faith and I believe this title I owe to God for empowering me in a way that I did not see myself capable of. Everyone knows that in order to fight at a high level you have to dedicate yourself, but even without being able to do that, I did what I could and was empowered. It was a dream come true since I was 14. I planted the seed.”

Ribamar also pointed out the decisive moment in the match against Gabriel, even when he had the opportunity to take his back at the start of the fight. “In the final, I was focused on winning. The adrenaline tired me a little; that was when I almost got the back. It’s very hard for me to miss that position — I practice it a lot — but thinking too much about the title almost cost me the win. When I focused on the fight, I got my game in motion, swept and was in control the whole time. I was more tactical; I decided to let the fight flow so I could score. That’s what happened, and from the middle to the end of the fight, I got more comfortable.”

The new world champion wrapped up the interview with some wisdom for the reader. “What hinders the evolution of a BJJ practitioner is the lack of ambition in hard work. They even want to conquer, they have the desire, but get discouraged when they know the journey they will have to go on to conquer. Many young people want to live off the sport, but few are willing to pay the price for success. Just plant the seed and you will reap the fruit. The first step is to believe that you can even when no one thinks like you. It’s your dream, not theirs!”