MMA win in the name of the father 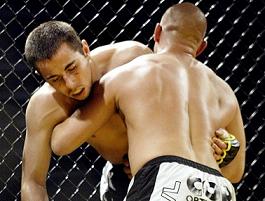 On January 16, brown belt Jiu-Jitsu phenom Brandon Bender continued his undefeated streak with a dominating submission victory over previously undefeated Jesse Newell to capture the CFS (California Fight Syndicate) 145 pound championship.  After landing  a crisp combination, the 22-year old Millennia MMA standout took the fight to the ground and quickly secured a rear-naked choke just 76 seconds into the fight.  Now 5-0, his last four victories have all come by submission and have a combined total of less than 5 minutes in the cage.
Bender fought with a heavy heart as his father, Donnie Bender, passed away just 5 days before the fight.  Donnie Bender had ties with the Carlson Gracie team and was the former manager of Vitor Belfort.