Minotouro back in training: “Anderson vs Belfort will be an awesome fight” 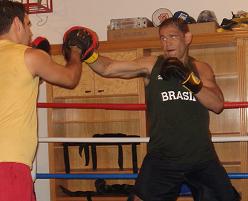 Speculation abounds that Rogerio Minotouro will face Forrest Griffin in the UFC. Recovered from an ankle injury that kept him out of his appointment with Brandon Vera, Minotouro won’t confirm the bout, but says he’s already back at work.

“I returned to training and I’ll likely fight at the end of April or early May. My opponent hasn’t been confirmed yet, but that’s the date they gave me,” he told the website of Brazilian network TV channel Rede.

Another who was on ice and is now back in training is Anderson Silva, Rogerio’s teammate. Anderson faces Vitor Belfort on April 10, in Abu Dhabi.

“They are two experienced fighters. Vitor is in top shape and has incredible muscular explosiveness. Now Anderson, striking, I feel is the most technical fighter in the world and is in the best shape of his career. For sure it’s a greatly awaited fight,” he remarks.

Minoto also spoke of the bout between Lyoto Machida and Mauricio Shogun, his relationship with brother Rodrigo Minotauro and, when asked about his favorite fighters, he doesn’t leave out veterans like Royce Gracie.

“I like BJ Penn, who’s been dominant at lightweight, Georges St-Pierre and Lyoto Machida. There are a lot of good guys, starting with Royce Grcie, who established Jiu-Jitsu in MMA and popularized the sport. We owe him a lot.”