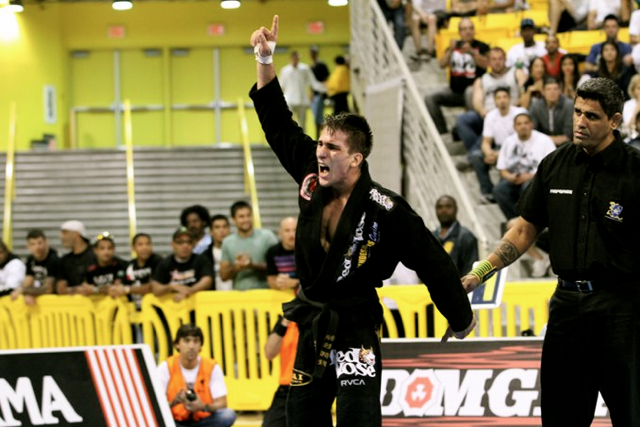 Guilherme Mendes at 2011 in photo by Kinya Hashimoto

Current world light featherweight champion Guilherme Mendes was tuned in when the fighter sharing his same last name, right in the octagon, performed a daring maneuver to avoid the nuisance of Rani Yahya’s guard last Saturday at UFC 133.

What risks did Chad Mendes’ somersault at the UFC pose? When’s the right time to be daring, like the UFC featherweight was? Our commentator for a day, Guilherme Mendes, agreed to put the move under the microscope for GRACIEMAG.com readers.

“There’s a great chance of that move going wrong. Even so, Chad wasn’t afraid, he didn’t think about the cons when he did it, and that’s what made him take the plunge. The result was real cool, it dazzled the fans. He was daring and wasn’t afraid to take a chance, which is quite rare in a fight because of everything that comes with a move gone wrong and a loss.”

The time to be brazen:

“A lot of folks simply “stall”, or don’t take chances, in competitions, and they don’t end up doing what they trained to do because they’re afraid to take risks or, even worse, because they’re afraid to lose. That causes you to not just lose to your opponent but to your own self. During a fight you have to use your confidence and daring. Confidence makes you see the fight the way a winner would before even having won, while daring is what catches your opponent by surprise. You surpass your limits.”

“In Jiu-Jitsu it probably isn’t. André Galvão did a similar move at a major championship (rewatch it in the video below, at around the 2:20-minute mark). André is the kind of athlete who, like Chad, shows he has this attribute, he’s not afraid to take a chance with daring and different moves. In my opinion that’s what makes his Jiu-Jitsu one of the greatest ones to watch.”