Meanwhile, Giva subs another one, at Bellator 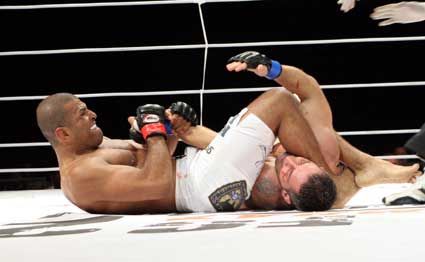 Givanildo Santana lived up to his moniker “The Arm Collector”, at Bellator this Saturday, coming up with an armbar win over Darryle Cob just two minutes into their fight. This brings Giva’s tally to 13 armbars of the 15 submission wins in his 17-win career.

In the middleweight GP, Ben Saunders put on a Jiu-Jitsu clinic, landing triangles and omoplatas against the game Luis Sapo, finally getting the submission with an americana lock in the third round.

At the other end of the bracket, Douglas Lima showed his boxing is up to spped, knocking out Chris Lozano in the second round.

Check out the results