In the men’s purple belt division, it was Manny Diaz of Sandro Batata in Santa Cruz, California, who took gold in both the absolute and medium heavyweight divisions at the Las Vegas Open. Flying in and out of Vegas the same day, Manny got to the tournament on Saturday morning barely making his first match. However, that didn’t ruffle the 28-year-old’s feathers as he took to the mats and powered through his opponents one by one. 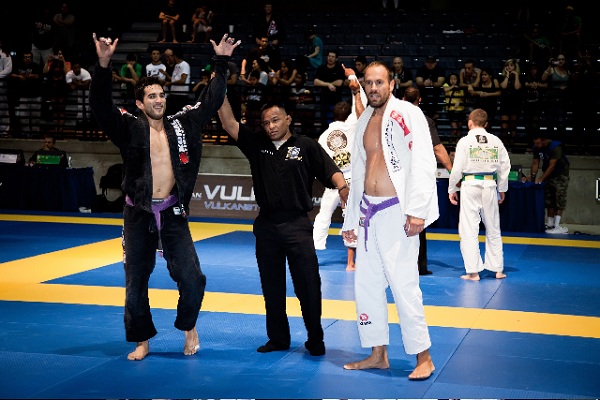 This was Manny’s second time competing in an absolute. The first came at the US Open, where he had the good fortune to close out the bracket with a teammate. This time, the win was all his. He had four matches in the open class. He won the first two by points and the third by armbar. “I fought really tough guys,” Manny says, “The little guys drain me. They really move. They wore me out!”

But Manny persevered and went on to face Gracie Barra’s Mike Colón in the finals. The two are not strangers to each other. They’re in the same weight class and met up at last year’s Pan in the same fashion, with Manny getting the better of Mike. At the Las Vegas Open Manny was able to shut Mike down again to take gold in the absolute.

“I watch Mike all the time,” Manny says, “He’s got the longest legs. I had to stay tight so he wouldn’t triangle me. He’s really good and he’s got good sportsmanship, too. It’s like battling a friend. It’s been a good experience fighting him. It makes it better. Makes it feel like we’re friends out here.”

As the two exchanged humorous banter after the match, Manny telling a laughing but frustrated Mike that there was a way he could beat him at his game. “You could get me if you just figured out how,” Manny said. The two went back and forth until Mike finally figured out that the omoplata is Manny’s kryptonite where Mike is concerned. “Maybe we should train together,” joked Colón.

In the medium heavy division, Manny had three matches on the day. He won the first by points. “I was playing guard, which is my game,” Manny says, “I like to let an opponent decide what they’re gonna do. Everyone likes the top; I like guard, so it works to my advantage.”

His second match was against the aforementioned Mike Colón. Manny won by two advantages to one. “He has a really good spider-guard,” says Manny, “Him and his daddy long legs! I had three loop chokes on him and he got out of all of them.”

Manny overcame Brad Pearson of Lloyd Irvin in the final to take divisional gold. It would be Manny’s first time winning double gold on his own and also his first time competing at the Las Vegas International Open. “It’s a great tournament,” he says, “Really well organized. I will definitely come back next year.”

One interesting tidbit about Manny is that he has only been doing Jiu-Jitsu for two and a half years. Prior to him taking up the gentle art, he was a golf pro; a teaching professional. “I just get it,” he says, referring to learning Jiu-Jitsu techniques. Winning double gold for the day, Manny definitely proved at the Las Vegas Open that he indeed gets it!