WEC featherweight champion José Aldo recently arrived in the United States, where he took the opportunity to refine his technique. His first title defense will be against one of the organization’s leading names, Urijah Faber, on April 24 in California. Speaking to GRACIEMAG.com, Aldo talks exclusively about the challenge. 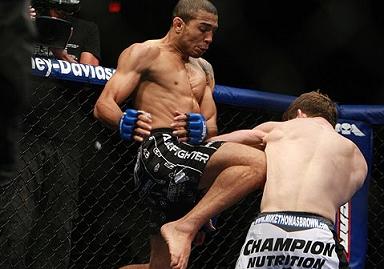 What do you expect from Urijah Faber?

He’s a heck of a tough guy, who has already been champion. It has all the makings of a great fight. I’ll train hard and we’ll see how it goes when time comes.  I think he’ll look to take it to the ground.  Faber has good wrestling, but I’ll have to defend and go on the attack. Whether on foot or on the ground, we have to be well trained.

What were you doing in the United States?

I spent time there to perfect my wrestling and boxing. As I like to fight standing, I think this exchange and to always improve is important.

For boxing, especially, you had some first-rate help, didn’t you?

I trained with Freddy Roach, Manny Pacquiao’s coach. The guy is awesome, has an enormous understanding of the sport. He saw many things, even in my movement, that could add to my game. He’s the man.

Much is said about the transfer of all the WEC’s weight divisions to the UFC, completely unifying the events. Know something more concrete about this?

I think there’s no way to unify them now. Maybe in the future, but not for now.

You were with Ronys Torres in his fight against Melvin Guillard at UFC 109. Do you agree with the result (unanimous decision to Guillard)?

Ronys was given a raw deal. He attacked the whole time, got the fight to the ground several times and tried to finish. He stood with Melvin on even terms. Maybe he has lost the second round, but still by not much of a difference. I think the result was unfair.