Gregor on ice for 4 months 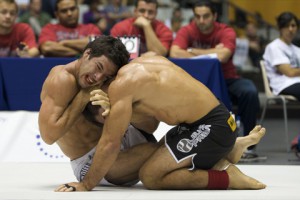 Gregor with a neck in his sights at ADCC 2009. Photo: John Lamonica

Gregor Gracie, a competitor and Jiu-Jitsu teacher living in New Jersey, will have to lay off the training for a while. If the doctor to operate him is correct, he’ll be on ice for four months due to an injury to a ligament in his shoulder.

“I hope to be well for the Worlds,” he said over twitter.

The operation is set for Thursday in Sao Paulo, and Gregor discussed the injury with GRACIEMAG.com.

What’s the verdict on this injury?

I tore my shoulder at the ADCC in Barcelona and will operate and do physiotherapy here in Sao Paulo. The doctor feels I should be able to return in four months. Truth is I injured it three months before the Pan, while training. That’s why I won my first match and then dropped out. At the ADCC It tore all the way through in my first match, against Murilo Santana.

What’s the plan now? You just going to watch your brother Rolles in Las Vegas?

That’s right! We’ll head over there and watch Rolles kick some butt.