Every week at Gracie Barra America in Irvine, CA, there’s been training going on for the championships in 2010. The team’s been training hard and although there are a few standouts in the group, the consensus is that the whole GB team is going to be a threat to every other BJJ school in the 2010 season.

Márcio Feitosa, a three-time world champion and head instructor of GB America says, “We train no matter what time of year it is. Even though GB has the best competition team, our training is never geared toward one competition. Master Carlos always makes sure we are a well-rounded Jiu- Jitsu team. We perfect self-defense, takedowns, and top-to-bottom training. Lots of places focus their training solely on a particular competition, but we are training very hard right now in every aspect of BJJ and the training we are doing will definitely help us in all of next year’s tournaments.” 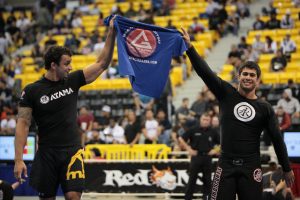 Feitosa bets the team will dominate in 2010, “GB competitors are already always on the podium in every country at every tournament, but we have a long-term plan that we started when we moved to Irvine. We notice that Jiu- Jitsu is expanding all over the world, so we don’t want to win just one big local tournament. We want to be present at tournaments everywhere – in Japan, the US, Brazil – all around the world. Our objective is to win every single tournament, everywhere.”

And who does he think will really make a name for himself in 2010?

“I’m a big fan of Roger Gracie’s style of fighting. It’s very basic and easy to understand, but he makes it work for him. I’m also expecting that Bráulio Estima will have another great year. I think Roberto Tussa Alencar and Romulo Barral will do incredibly. Ana Laura Cordeiro is our female fighter – she will do awesome again. She’s had over 60 fights and never lost one. She’s an amazing competitor”, Feitosa says.

The last time Cordeiro competed was in the 2009 Pan Ams and won Absolute. She’s been waylaid by a back injury, but hopes to compete in the Pan again in 2010, “The training that we’re doing at GB America every week is so important. While most people are off the mats over the holidays and in the New Year, we’ve been on the mats, working hard. I know our team is going to succeed. We work harder and have more experience on the mats. Everybody’s so good this year.”

Otavio Sousa’s attained world champion titles as a blue belt, purple belt, and brown belt. He’s now a black belt at 23 years of age and wants a world champion title in that as well. Sousa just moved to Irvine from Brazil and says the level of training and experience he’s getting on the mats with the other black belts has been life changing, “I’m so happy to be here. It’s been a great experience being able to train with some of the best black belts in the world. My plan is to win gold as a black belt in every competition. I’ve already won gold in all my other belts. I want it as a black belt, too.”

Another GB competitor looking to take the 2010 competition circuit by storm is Lucas Rocha. At just 19 years of age and fresh out of Brazil, he will be receiving his brown belt any day. He’s a multi-time world champion in his blue and purple belts and is setting his sites on the gold as a brown belt, “I want to win gold in all the big tournaments this year, but I want to add the open class to my goals as well. If we continue to work as hard as we are, I think our whole team will do very well.”

One of GB’s most faithful and fierce black belt fighters is Philipe Della Monica.  Feitosa says he’s very young (he received his black belt two years ago at the age of 22) and he’s getting better and better, “I’m looking forward to seeing the ways in which he improves. I would really like to see him take gold in his division this year.”

Della Monica says he trains twice a day, with the black belts and with his students, then he instructs classes in between: “Marcio has been teaching us lots of techniques and strategies and we study them on and off the mats. In fact, many of the black belts live together, so we also exchange techniques in our living rooms! We are always rolling.”

As they say, “the family that rolls together, stays together”, and Della Monica says that’s exactly what these GB fighters do, “we either live with each other or really close to each other, so we are getting invaluable experience rolling together. Most all of the top fighters have come from Brazil to California to live and train, and we also have Master Carlos who lives here half the year. He’s always helping us and advising the team.” 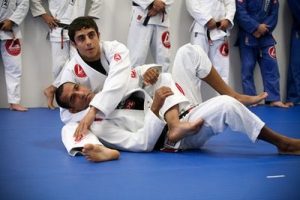 Another tough newly anointed Middleweight black belt competitor is Kayron Gracie. Feitosa says, “It’ll be interesting to see how Kayron does in his black belt division. He’s in a very tough division and I can’t wait to see how he performs.” Master Carlos’ beloved son says he feels great and is getting quality experience from the other GB black belts, “I learn something new every time I train with them on the mats. The training is so important to me, I can’t miss a class. This is my first year as a black belt, so I consider this more of a learning year for me. It’s not going to be easy, but I am definitely up for the challenge.”

As another exciting year begins for this close-knit and impressive GB family of athletes, black belt Maycon Carvalho wraps up the whole GB Competition Team’s sentiments succinctly, “It’s an honor to represent GB at the world-class level. GB is our family and they have taught us everything we know. It’s been an amazing journey.”