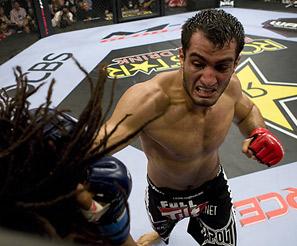 Riding a 14-fight winning streak, Gegard Mousasi has beaten such top-flight opponents as Melvin Manhoef, Ronaldo Jacaré, Renato Babalu and Rameau Sokoudjou, among others. Owner of the Strikeforce light heavyweight and Dream middleweight GP belts, the Armenian just keeps earning more and more respect in the world of MMA. At only 24 years of age, he has amassed 27 victories, just two losses and one draw.

And there is no end to the number of challenges being thrown the fighter’s way. As confirmed by the organizers of Dynamite!!, to take place on the 31st of this month, Mousasi will enter the ring to face Gary Goodridge in a K-1 rules bout. Beyond his New Year’s fight, he has a plateful of challenges coming up in 2010.

According to his manager, Apy Echteld, in an interview with MMAJunkie, Mousasi should fight in both Strikeforce and Dream during the first semester of the year. The former, probably to take place in April, the card will probably feature Fedor Emelianenko, while the event in Japan to take place May 30 will feature the organization’s light heavyweight GP. The fighter also had a boxing match scheduled for January, but plans changed upon confirmation of the Goodridge fight.