Danillo: maturation, yawns and “scolding” from father after win over Villaseñor

Jiu-Jitsu and judo black belt on American Top Team Danillo “Índio” Villefort, 27, had his most mature exhibition ever last September 11.

The Brazilian living in Florida with experience in the UFC (one doctor’s-intervention loss), the WEC, Jungle Fight and the AFC, won an authoritative unanimous decision over always-game Joey Villaseñor (27w, 8l), at the Shark Events 13 event in Texas, making it to his twelfth win, with three losses.

He spoke with GRACIEMAG.com behind the scenes at SF 13, discussing his maturation and explaining how his father Master Francisco Índio was outraged, even after Villefort won his bout. 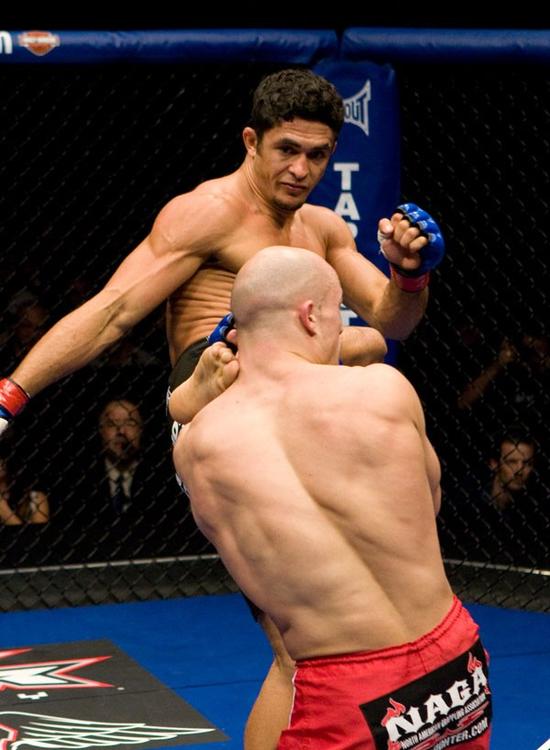 Danillo Villefort during WEC days, in photo by Josh Hedges

Villaseñor came in after a title fight with Ronaldo Jacaré at Strikeforce. What does this win mean to your MMA career?

I’ve been trying to get a fight with a big-name fighter for some time, and this opportunity came up at the right time. Thanks to my team, I was readier than ever to go in there and make it happen. I’ve never ducked a challenge, and I wasn’t going to let this one slip away, nor back down. Fortune favors the brave. After this win some doors opened for me, and my manager Alex Davis is taking care of it. Soon I’ll have some good news for you.

You controlled the fight well standing and on the ground. What do you feel made the difference?

Well, it was the first time my brother Marcão and Jorge Santiago were in my corner; that was excellent! In the dressing room, though, something bizarre happened. Man, I just couldn’t get warmed up for the fight. That had me kind of out of sorts, and I couldn’t stop yawning. I was so sleepy; I think it was the adrenaline. But then [Marcos] Parrumpinha, Jorginho and my brother woke me up, and I went in to fight ready.

And what did your father say about the fight?

The old man liked my performance, he just got angry about the third round, when I got taken down. He complained like crazy to Gesias [Cavalcante] and to the folks who were with him (laughs). But he saw that I was fine on bottom, and he relaxed.

Your father worked as head of security for the Brazilian senate for forty years. What are his thoughts on the presidential election coming up in Brazil on October 3rd?

I think he knows about a lot of things we haven’t a clue about. After all, he’s been working in the field for forty years. I hope the Brazilian people get the vote right, because it would be a shame for a country as beautiful and plentiful as ours without much infrastructure. If us athletes had training centers like the ones we have here in the USA, we’d have much better results in all sports.